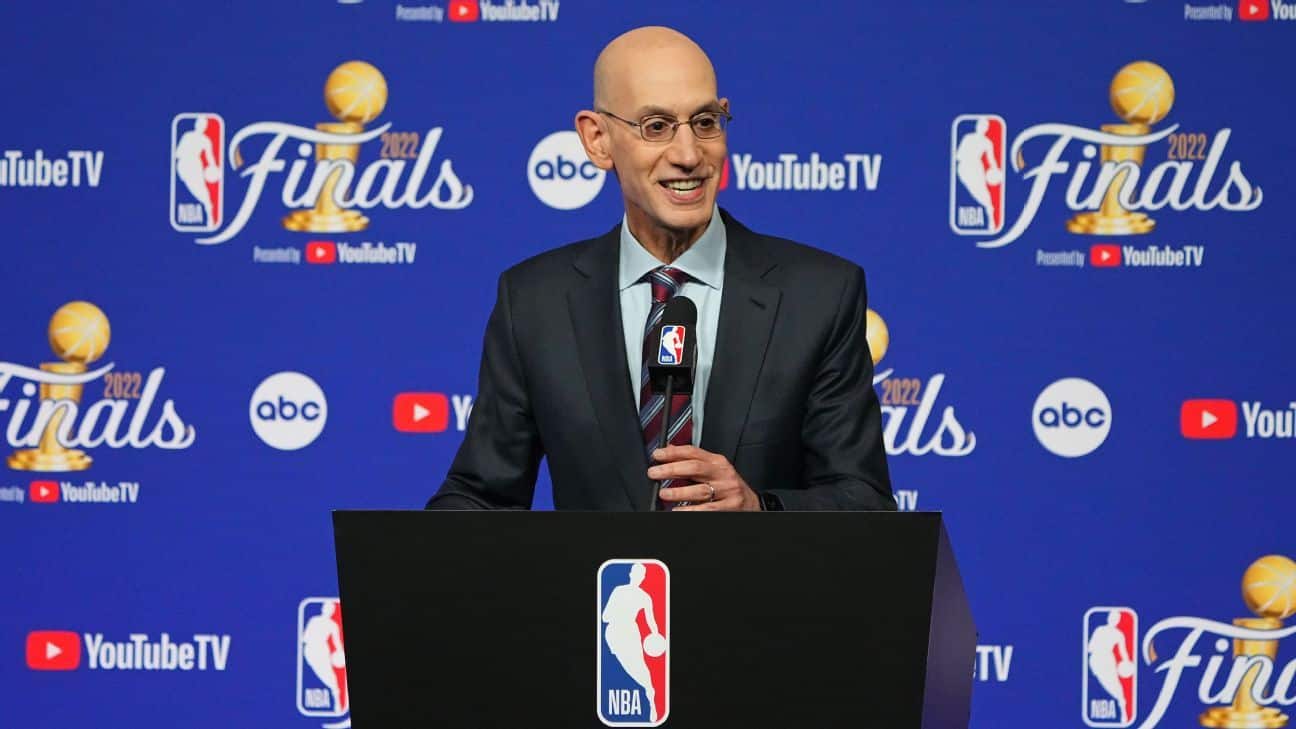 SAN FRANCISCO — Commissioner Adam Silver stated that the NBA may change the way the All-NBA voting system works. Instead of relying on position-based systems, the system will allow voters to select the best 15 players regardless of their position. Silver indicated that he intends to address the issue with the National Basketball Players Association.

“When it comes to determining All-NBA's fate, I believe that there is a lot of thought going into whether or not [the media] Silver stated that it was better to pick top players than picking by position at a news conference before Game 1 of the NBA Finals. “I believe we have a league that is moving more towards position-less basketball. The current system could lead to inequalities based on what your position might be.

“So that is something that we are looking into. It is something we will discuss with Players Association, as it has an impact upon incentives and players contracts. And it has deep meaning for their heritage. We will be looking at these things.”

Two centers have been discussing the question of whether the ballot should still be determined by positions in the last two years. Nikola Jokic The Denver Nuggets And Joel Embiid The Philadelphia 76ers — placed 1-2 in league voting for the Most Valuable Player award.

However, the current system does not allow one of them to be a First Team All-NBA Player. The other, in this instance Embiid, would have to be a Second-Team Selection.

Silver said that there will be further discussions on whether contract bonuses will tie to media awards voting. However, he also stated that both sides have reached an agreement that this is the best option out of a number of imperfect options.

Silver said that the ultimate selection process, and the fact that some cases can have an immediate financial impact on a player’s contract in certain cases, is now under our control. The Players Association agreed to use these designations to trigger bonuses in players’ contracts.

Silver discussed a variety of topics in his 30-minute interview with reporters.

Silver stated that he hoped that a similar blueprint would follow this time around. However, he said it was too early to predict this, as he is still getting to know Tamika Tremaglio, the executive director of NBPA.

Silver stated, “I think that we all know that deadlines are really helpful for any negotiation, and perhaps collective bargaining in particular,”

Silver stated that they have been talking more about the COVID-19 pandemic over the past two and a half decades, which has increased his confidence in a possible amicable agreement.

• Silver said the idea of a midseason tournament remains on the table, though is not yet finalized, as more discussions with the NBPA are required. Silver also said that he would be open to discussing a shorter season if injuries can be mitigated.

Silver stated, “As I've said before, we don't see an increase in injuries as the season progresses.” It's not like you get more injuries because of fatigue. For example, we see a link between fatigue from having to do back-tobacks or three consecutively. That could potentially lead to more injury.

• As he has in the past, Silver shot down the idea of expansion happening in the near-term, though he did again reiterate it is something that the league is going to do again at some point. He said one issue that could arise from expansion is the possible dilution in talent.

Silver stated, “Even if you add 30 more players or so that are roughly equivalent, there are still only so many truly top-tier super talent to go around.” As we consider expansion, that is something we keep in mind for the other teams.

• Silver said the NBA has lost “hundreds of millions” because of its strained relationship with China, and said that is an acceptable cost of doing business when it comes to protecting free speech of the league's players, coaches and workers.

Silver said, “We accept it, and I stated that when we said that we stand behind our players, team executives, their right of free expression about issues in America or any other place in the world,, I mean that my values travel with me.” “Others have, as you know from their statements about China and other countries in the world, and we are open to accepting the consequences if we lose money or get taken off the air.”

Silver stated that he still believes engaging with China is compatible with the league’s values, in spite of the alleged human-rights violations being committed within China.

• When asked about women being far away from being a head coach, Silver said it remains a work in progress. He stated that Becky Hammon's decision to join the WNBA to coach the Las Vegas Aces should not be viewed negatively.

Silver stated, “But I've already said it, and I should've said it earlier, there's no reason women shouldn't head coaches and more of them shouldn’t be assistant coaches for the NBA.” There's no reason women officials shouldn't have more. Both of these areas have seen progress within the league. We have a lot more female assistants in our teams now, but we need to break the glass ceiling.”

Silver said that the NBA increased its Black coach count to 15, and hired Darvin Ham. Los Angeles Lakers Last month's product was a result of the league continuing its emphasis on diversity.

• When asked whether a positive test for COVID-19 next year would mean a player would be unable to play, Silver said that recommendation would come from medical personnel, and that it was too early to say, adding that the NBA is only a small part of the world in terms of learning how to live with the virus moving forward.