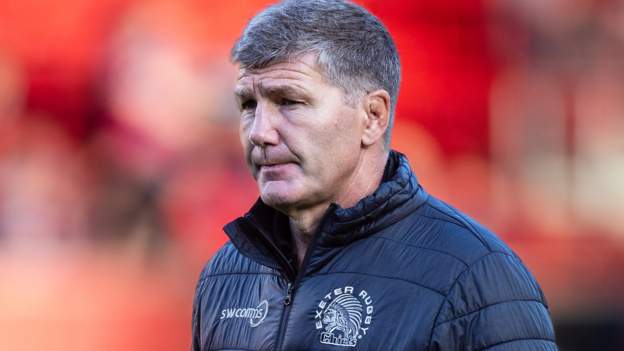 Rob Baxter, Exeter manager, says that his team missed the Premiership playoffs because of his early season decisions.

The Chiefs, who are in the top 2 every season since 2016, cannot finish higher than fifth.

Exeter has won 12 out of 23 of their 23 games, and they were victorious only in half of their first eight games. This was due to injuries and international call-ups.

Baxter said to BBC Devon that he held his hand high and that a lot of it was down to him.

“I believe that I could have guided us initially as a coaching team, and maybe as an coaching group and as a playing group. Maybe a little differently in the first part of the season.

“We could have been more positive about what was happening in that playing group, and what our targets were. Game by game, half-way through the games.

This season, international stars like Jonny Hill, Luke Cowan-Dickie and Jack Nowell played very few games. due to call-ups and injuries, Back-ups like Jacques Vermeulen or Will Witty were also ruled out.

This led to Josh Hodge and Christ Tshiunza being able to fill in the gaps.

Baxter stated that our focus was on collecting points that we could increase over the season. However, for lots of them, the fun part of that playing group was that they were enjoying their Premiership games. Premiership experience was being gained, and they were playing in front large crowds.

“All the kinds of experiences that a lot if those guys had not had, those were the big experiences. We probably didn't pay enough attention to that because those were their big times. The winning and losing weren't what was most important for them.

“If you are a debutant, it's amazing that you make it. If that's a starting point in your career, you want to keep going. We've likely had that situation quite a few times.

“When a section of your team has had their best season because the players have got in and are pressing in their careers, but the league finishes worse than it did for six consecutive years, it can feel contradictory. However, for these guys, it has been true.”