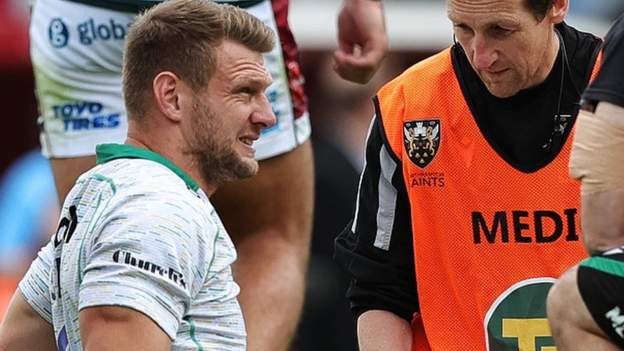 Dan Biggar, Wales' captain, said that he hopes to be able to tour South Africa in the summer after a limping injury sustained in Northampton's defeat against Leicester.

Biggar, 32 years old, was taken off the field due to a back injury in the second half.

The fly-half of Wales is expected to lead the team in a three-Test series against South Africa. The tour will begin with the first match in Pretoria on Saturday 2 July.

Biggar said, “I hope I will be all right.”

After suffering a shoulder injury, Alun Wyn Jones sustained, the British and Irish Lion led Wales to the 2022 Six Nations. Biggar will continue as captain for South Africa.

Biggar sustained the injury in the first-half against Leicester when he attempted to kick down a shot. He was unable to recover.

Biggar said, “As I went for a bit more of a charge down I have just tweaked mine a little bit to get a bit shooting pain.”

It will likely be stiff for a few more days. It was the only one that stiffened up and couldn't move well.

“It was disappointing to have to accept the outcome and not be able change it.”

Northampton was leading 6-1 when Biggar left. Leicester, however, dominated the exchanges to make it to the final against Saracens at Twickenham.

Biggar said, “It was frustrating. We left some points. Certain golden opportunities out there.”

“In a semifinal away from home it is important to not take chances. If you do, it will come back and bite.

“That's what actually happened. We did not seize our chance and Leicester came back in the second period and ended up winning the game.

“All credit goes to them, they did it really well and made a difficult task of us getting out of our own half.”

He said, “That is one that got away.”

“If you're completely outclassed by or blown away in semi-final, you can usually get over it pretty quickly.

“Things like this will probably take a bit longer to get through.”