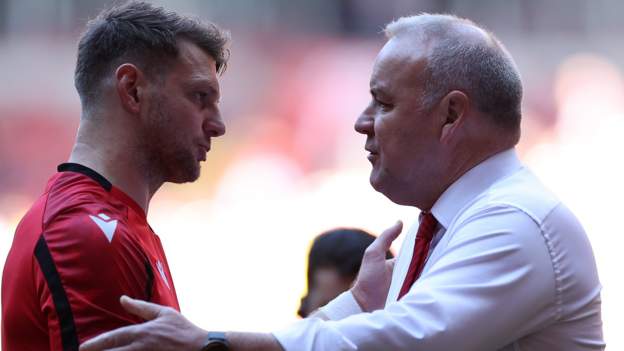 Wayne Pivac, the Wales coach, is expected to keep Dan Biggar as South Africa's captain for the three-Test tour.

Lock Alun Wyn Jones will be joining the touring party, with Biggar retaining the captaincy that he held during Six Nations.

Jones missed the first four matches of the tournament due to a shoulder injury, but he returned in time for the defeat to Italy and received his 150th Wales cap.

Tommy Reffell, uncapped Leicester flanker, is up for a call-up.

Jones has been a regular captain of Wales since 2017. He helped the country achieve Six Nations success in 2019 & 2021. Jones was also a leader for the British and Irish Lions during the 2-1 series loss against the Springboks last season.

The 36-year old suffered a shoulder injury in October 2021 against New Zealand and was only able to return in the Six Nations final against Italy five months later. Northampton fly-half Biggar led Wales during the tournament.

Jones has since played three Ospreys games, while Lions' back George North has played two matches after returning from a knee injury that had kept him out of the game for over a year.

Justin Tipuric and Ken Owens, Willis Halaholo and Aaron Wainwright, along with Leigh Halfpenny, will be missing the trip. The trip begins in Pretoria on the 2 July, and ends with matches in Bloemfontein on Saturdays.