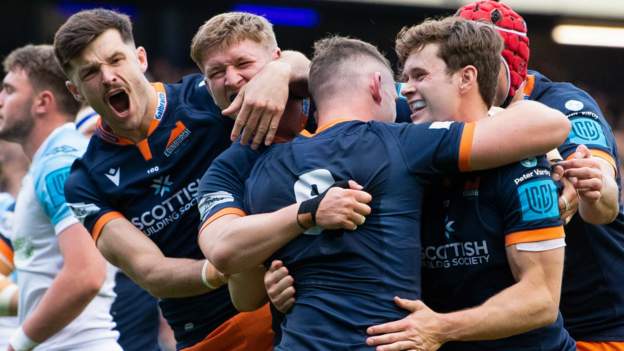 Edinburgh was qualified for next season's Champions Cup, and the 1872 Cup was reclaimed by them after their dominant victory over Glasgow Warriors.

Mike Blair's team also avoided a quarter-final of the United Rugby Championship play off against leaders Leinster, after leapfrogging visitors into seventh.

Instead, Glasgow will be facing the Irish side when Edinburgh visits Stormers.

Edinburgh had to win the game to reverse the Scotstoun defeat of 30-17 in March, and to prevent Glasgow from holding onto the 1872 Cup.

They won the first Scottish-Italian minileague within the URC. But more importantly, it earned them the honor of representing the country in Europe's top competition next year while Glasgow were consigned to the Challenge Cup.

Tensions were high due to the winner-takes all nature of this normally fiercely contested derby. Warriors started brightly but Edinburgh struck first after Sam Johnson, centre, conceded two penalties in quick succession before the posts.

Emilliano Bioffelli fell short of his 22-metre mark in his first attempt. But, Argentina came back strong with the second.

Ross Thompson replied under the posts to Hamish Watson's ruling offside. But Edinburgh started to take control after flyhalf Kinghorn dodged a Johnson tackle and made a smart spin. Edinburgh crossed the line with half an hour remaining despite Rufus McLean's attention.

Boffelli added the conversion. Thompson did narrow the gap to four points just before break when Luke Crosbie got penalised for playing on the deck. This was immediately overturned by the home fullback when Ryan Wilson, Glasgow captain, blocked the restart.

Edinburgh quickly established a dominance at half-time. Darcy Graham & Chris Dean combined to create a gap for Bradbury back row to touch down.

Glasgow fell to 14 men in 10 minutes after forward Rob Harley was sinbinned. They were punished when Richie Gray's offside allowed Boffelli's Edinburgh lead to grow to 15 points.

Glasgow was now in front on aggregate in battle for the 1872 Cup.

But, the home team won all the bragging rights. A fine move between Mark Bennett and Kinghorn ended in Edinburgh's fullback passing inside for the supporting Hoyland.

Warriors were able to salvage some inter-city glory when Smith brilliantly caught a Domingo Miotti crossover-kick mid-air. The Warriors were unable to score another score because Smith was too fast.

Now Edinburgh will face the Stomers, who came in second place after their impressive 26-21 win over Scarlets, Wales. Meanwhile, Glasgow takes on Leinster who were victorious 35-25 against visitors Munster. Both games take place on 4 June.

Edinburgh head coach Mike Blair:“We have been so determined to play the significance of the game down that I didn't push for the idea of Champions Cup Rugby, but we're clearly happy with that. The game was enjoyable, something I don't usually do.

“These games are all about momentum and taking chances. We were able to make daylight between the teams. This meant that we didn't need to play as often and could put pressure upon Glasgow.

Danny Wilson, head coach of the Glasgow Warriors:“We came to this game thinking that if we can bring some speed to the game, we could put them through the same tests as at home. We failed to do so. Edinburgh took advantage of the penalty killings.

“Our penalty count in the first half hour and our turnover rate are two of the most notable numbers. They were able to counter-attack with these numbers. Although today was a disappointing performance, it was not a difficult day. However, we can bounce back now that we have a trip in Ireland.