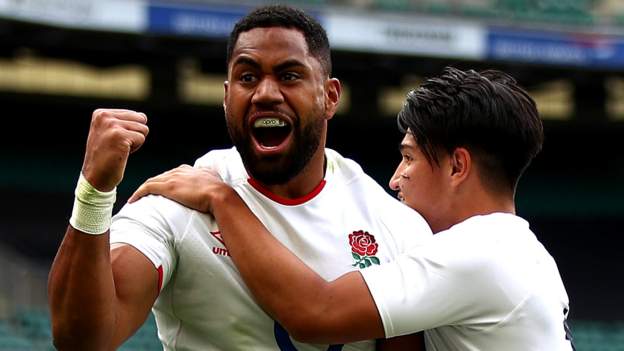 Wing Joe Cokanasiga proved he was more than ready for his England return with two tries in Sunday's win against the United States at Twickenham.

In his first Test since 2019, Cokanasiga shone in a seven-try victory that was far from flawless.

With eight debutants in the starting XV, the hosts started brightly scoring four tries to please the 10,000 fans.

But England's error count climbed after injuries to Max Malins and Ollie Lawrence and they conceded four tries.

Highly-anticipated uncapped half-back pairing Harry Randall and Marcus Smith at least gave supporters something to shout about before the final whistle as they both scored their first tries for England.

Rather than the debutants, it was those already capped who initially looked most keen to make their mark as Eddie Jones considers his options for the 2023 World Cup.

With 12 England internationals part of the British and Irish Lions squad in South Africa, Cokanasiga looked capable of filling the void after bouncing back from a knee injury.

Wing Malins impressed in the air to set up Sam Underhill's opening try, but the Saracens back left the field with a shoulder injury soon after and returned to the stands with his arm in a sling.

Lawrence – who earned his first England cap in October 2020 – displayed his power as he barged through a tackle to score on the left but he too was later replaced after a clash of heads.

With Jones only naming two backs on the bench, several players were left out of position including fly-half Jacob Umaga at centre and scrum-half Dan Robson on the wing.

Nevertheless, several debutants seized their opportunity at Twickenham and scrum-half Randall made his offering plain to Jones with repeated quick-tap penalties upping the tempo in a man-of-the-match performance.

Number eight Callum Chick showed good control from the back of the scrum, while full-back Freddie Steward was solid in the air.

Fans have been waiting many years for Harlequins fly-half Marcus Smith to make his international debut and head coach Jones said he was “not sure” how the 22-year-old would cope with Test rugby.

Smith did not make an immediate impact but settled in as the game went on, contributing to England's opening try with a pin-point kick-off and put Cokanasiga through a gap for the wing's second score before going over himself to the delight of the crowd.

Randall's try was perhaps the best of the match as the scrum-half showed the cool assurance it takes to succeed on the international stage, throwing a dummy to open a gap, which he stepped through to score.

The four second-half tries conceded suggest that most work is needed in defence and Jones' side have six days to improve before they host Canada in their final summer fixture on Saturday.