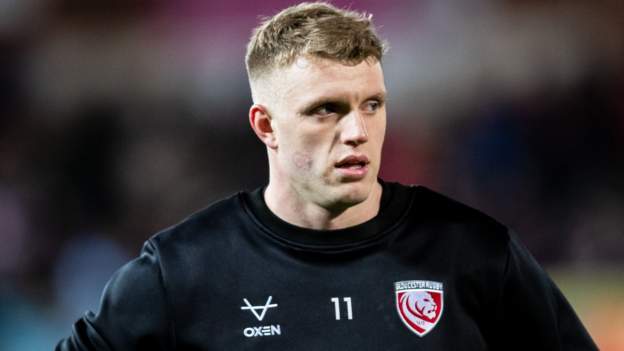 The 25-year old academy graduate will be playing on the wing for the side that defeated Bath 64-0 last week.

Both teams make three changes to their last matches. England's Maro Itoje is back for the visitors.

Fraser Balmain, Val Rapava-Ruskin, and Val Rapava Ruskin are back in the front row for their hosts.

Jordy is flanked by Jordy Renison in the starting team XV.

Tim Swinson is also in the Saracens' second row. Alex Goode has been recalled at fullback.

The visitors arrive at the match having won 38-16 against Worcester in the Premiership and have qualified for the end–of-season playoffs.

The Gloucester team won 25-24 at StoneX Stadium in a close contest earlier in the season. They will be meeting again in the Premiership season's final day in June.

George Skivington, Gloucester coach, said to the club's web:“The atmosphere last weekend is incredible. It was amazing to hear the voices, shout outs, and all the pre- and post match stuff.

“It was an important occasion for all the supporters and I think that they were grateful to what the boys delivered. The boys are always grateful for all the noise made and everyone who comes.

“We are looking forward to the return of Friday night's festivities. We're hoping to get as many people as possible and there will be lots of cheers. This will allow us to give everyone something to smile about.

Mark McCall, Saracens director rugby, spoke to the club's site:“When you reach May and are involved in knockout rugby, it's exactly what your heart desires. It was a massive team effort to get to this point.

“To go to Gloucester on Friday night in front their crowd is the type of atmosphere that we've been missing and we're up against a team who are really on top.

“They've been amazing at home, and it's one the best places to play, so we're really looking forward.