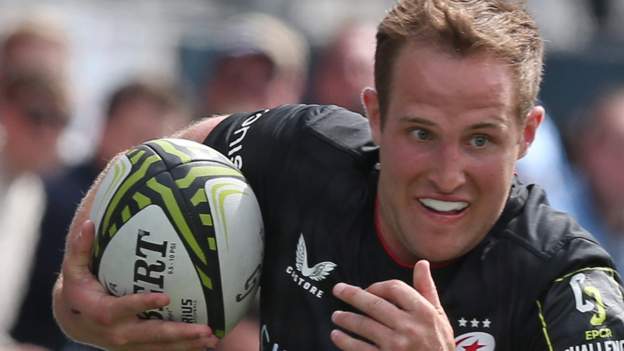 Saracens defeated a determined Cardiff fightback to secure a quarter-final date for the European Challenge Cup with Gloucester.

Max Malins was outstanding for Mark McCall, scoring a try and contributing two points for Sean Maitland. Sarries came out on top in the second period.

Dom Morris scored the first Sarries try, and Owen Lane got one to help Cardiff win.

Rhys Carre came in late to make a finish but Saracens prevailed.

The three-time Champions Cup champion Saracens are playing in Europe's second-tier competition. However, they showed their determination to progress with McCall restoring Malins and Maro Itoje to strengthen their ranks.

They were unable to win the game against a Cardiff team struggling to form in the United Rugby Championship. However, they belied their struggles with grit, determination, and willful disregard for the rules.

Their rhythm was disrupted throughout and it took real class and skill to bring down the Welsh club. This was exemplified by Duncan Taylor’s no-look pass for Morris' score, and the subtle hands that Malins displayed for both Maitland's attempts.

Tomos Williams, Visitors' scrumhalf, was a firecracker during his stint. He glided between defenders to score his try, and then cut through again for Lane. Rhys Priestland contributed 16 points from the tee.

Dai Young's side is going to regret some of the missed opportunities. Lane was not able to get from Hallam Amos’ surge and spilled with the line calling.

This is the end of any hope of reaching Champions Cup. Sarries will continue to fight for glory on every front.

The winners of the 2006 and 2015 editions of the tournament were Gloucester.

Tie to be played on the weekend of 6-8 Mai