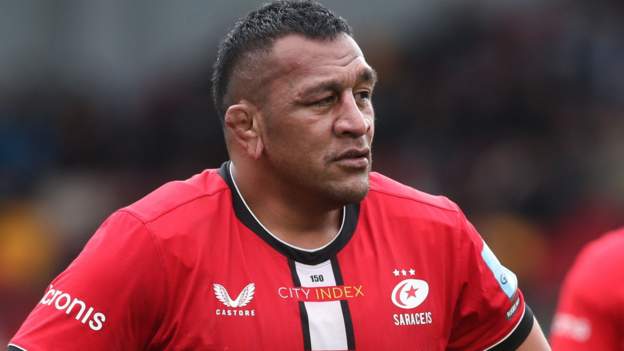 Mako Vunipola from England will be making his debut in less than two months when the Saracens travel down to Toulon for the European Challenge Cup semifinals.

Nick Isiekwe in the second row is preferable to Tim Swinson.

Saracens reached this stage in the Challenge Cup for the first time in 2009, when they lost to eventual winners Northampton At Franklin's Gardens.

They are their first season in the lower-tier European competition since 2010, having been promoted from the Championship last year after being forced to relegated due to violations of the salary cap rule.

Toulon is without South Africa's star winger Cheslin Colbe due to a broken thumb. However, Eben Etzebeth, his compatriot, sits in the second row of an international line-up.

Mark McCall is the director of rugby for Saracens

“We've been following Toulon for quite some time, and there has been quite the shift since they changed coaches.

“There's been a real revival in performance from Franck onwards [Azema]He was onboard.

“And they've got fantastic players – there is tremendous talent there, a formidable group.

“They have shown great improvement in performances and results over the past two to three months. They have beat Toulouse and La Rochelle at Toulouse, so we are aware of the enormity of the challenge.”