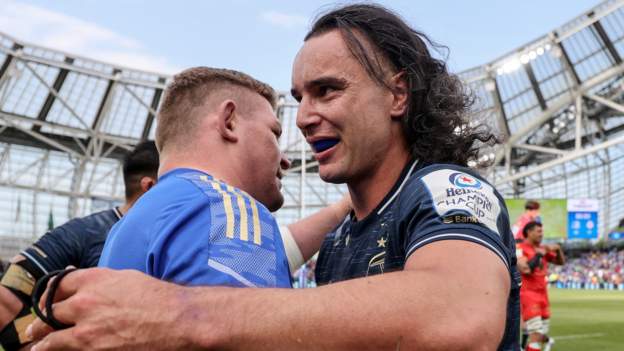 Before Saturday's Champions Cup final against La Rochelle at Stade Velodrome, Marseille, Leinster will be monitoring the fitness of Tadhg Furlong (Ireland) and James Lowe (Ireland).

Leinster are looking for their fifth European Cup win and their first since 2018.

La Rochelle want to do better than last season, when they lost 22-17 against Toulouse in their first appearance at a final.

Leinster Rugby released the following statement: “Tadhg furlong (shin), James Lowe (shin), and Nick McCarthy (shoulder), will increase their training load in this week and be continuously assessed before Saturday.”

There was a clean bill of health however for hooker Rónan Kelleher who needed a head injury assessment during the win over the defending champions, in which Lowe scored two tries.

Jordan Larmour, who was named man of the match in Leinster’s URC win against Munster on Saturday evening reported no issues and has completely recovered from a hip fracture.

In the same game, centre Ciarán Frawley was removed for a head injury assessment, which he passed, but he did not return to play due to a facial injury and will be further assessed this week.

Cormac Foley was a scrum-half and he suffered a shoulder injury in his first home game against Munster. This week, he will undergo further evaluation.