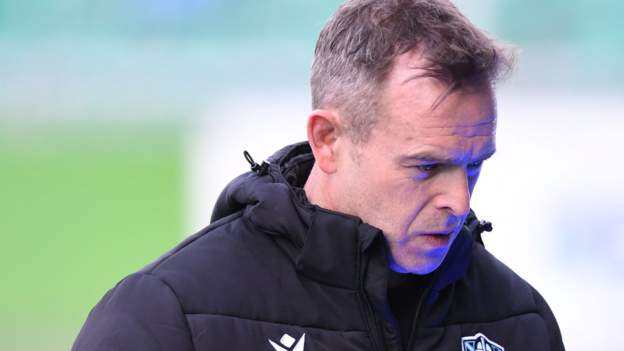 After the embarrassing defeat by Leinster in quarter-final of the United Rugby Championship, Danny Wilson was fired as Glasgow Warriors' head coach.

The Warriors lost six of the final eight matches and were hammered by the hammering to end their URC season.

Al Kellock, managing director, stated that their form was “not acceptable.”

After taking over from Dave Rennie, Wilson, 45, leaves the club.

Kellock stated, “We are a proud organization and want to compete week in, week out,” and that a change in head coach was the best thing to do.

It is not always pleasant to have to make team changes, but we had to do it. Danny is a wonderful person to work with. He has done a tremendous amount for Glasgow over the last two seasons.

During the Covid-19 pandemic, Wilson assumed control of Glasgow in the 2020-21 season.

The Welshman managed to lead Warriors to a respectable fourth place finish in a troubled campaign. However, this season began positively, with Glasgow once again striving towards the top.

However, a poor second-half of the campaign combined with a string of only two wins away form home throughout the season led to an eighth-place finish. Leinster was thrashed in their quarterfinal.

Their decline in form led to them losing a spot next season in the Champions Cup. Edinburgh, their rivals, secured the final spot.

Wilson stated that he was proud of finishing the season in the top 8 and qualifying for the quarter-finals. However, he was also disappointed by the results at the weekend.

“I want to thank the Glasgow Warriors players and staff for all their hardwork and commitment during the two seasons I was with them.”

Wilson was previously the forwards coach for Scotland and had also coached Cardiff Blues in Wales before he was appointed coach of Glasgow.