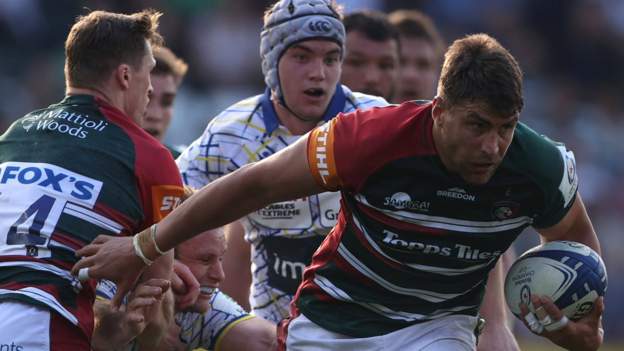 Clermont Auvergne won comfortably over Clermont Leicester, despite Ollie Chessum being sent off.

Hanro Liebenberg (Matt Scott) and Freddie Steward scored for the hosts. The penalty try was also given to them.

Clermont got two tries during the second period, while Chessum received a dangerous tackle.

This meant that Leicester ended the tie with 14 men. Guy Porter was sent to France one week earlier. However, they were able to secure a quarter-final home against Leinster.

Clermont had already been forced to change early when George Moala, centre of Clermont, was injured. Samuel Ezeala replaced him shortly after Liebenberg, flanker, ran over by the posts in preparation for Leicester's first attempt.

After a superb piece of work, Clermont scrum half Baptiste Jauneau managed to score a try. The ball was just out of play after Jauneau's brilliant charge in the in-goal area.

Leicester started to slip away in the second-half, and substitute Scott came on after good set up play by Tommy Reffell & George Ford.

Alivereti Raka reached for Clermont's first try. But the three-time winners were quickly down to 14 when Etienne Fourcade sent them to the sinbin.

The Tigers quickly took advantage of Clermont's inability to concede a penalty attempt, which led to Daniel Biziwu getting the yellow card.

Chessum got his marching orders two minutes later after his high tackle of Ezeala. However, Steward claimed the try of match when England fullback finished off an attack that had started at Leicester's 22.