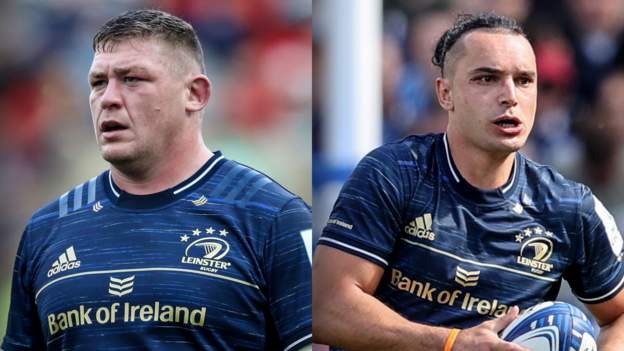 James Lowe and Tadhg Furlong, both from Leinster, have been cleared to take part in Saturday's Champions Cup final against La Rochelle.

They were both injured but they are still listed as part of the unchanged side that won over Toulouse in their semi-final.

Last year's beaten finalist La Rochelle will not be without Victor Vito, flanker, and Tawera Kerr Barlow as scrum-half. Both were injured.

Thomas Lavault is in the second row, while Will Skelton starts in Row 2.

Skelton, an Australian lock had been suffering with a calf problem but was able to return to the bench during La Rochelle’s Top 14 win against Stade Francais.

Leinster was not pleased with him when they met in the semi final of last year's competition. The French team emerged victorious.

Kerr-Barlow, the influential player, broke his hand during La Rochelle’s semi-final victory over Racing 92. Vito, a New Zealander, misses what would have been a final appearance for Club due to an injury to his ankle.

Prop Furlong was injured in his ankle and had to be taken off against Toulouse after just 17 minutes. However, he is now fit enough to rejoin Ireland teammates Ronan Kelleher (right) and Andrew Porter (left) in the front row.

Lowe was recently nominated European player of year after scoring a record 10 tries in six Champions Cup appearances. He also suffered a shin injury from scoring twice in a 40-17 defeat of the defending champions.

Garry Ringrose will be making his 100th appearance as a Leinster player, as they attempt to lift the trophy for a fifth consecutive year.