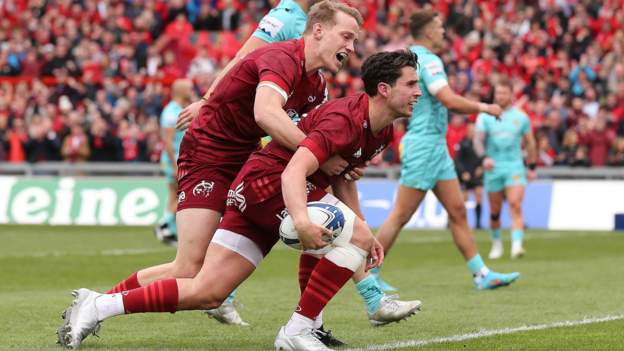 Joey Carbery put on a great performance when Munster overcame a first leg deficit to beat Exeter. They will now reach the Heineken Champions Cup quarterfinals.

Jack Maunder was the first to score for the visitors. They led 13-8 at the end of the first leg before Carbery crossed to give Munster the lead.

Jacques Vermeulen won the break, but Carbery's boots edged out the Irish side on aggregate.

The next round will see the Irish province play either Ulster, or Stade Toulouse.

Munster bounces back from a rocky start

Munster had a 10 point deficit at the start of the first leg. However, they recovered in Exeter to make it five.

Carbery gave them an early penalty, but it was the visitors who got the ball on the board first. Maunder responded quickly with a tap to the line.

Conor Murray, the veteran host, was then lost for 10 minutes in sin-bin. However, the hosts recovered and Carbery gave them the lead again.

The fly-half saw Harry Williams in Exeter and was able to avoid the prop. His side scored his first try.

Exeter threatened a fightback following the break. Vermeulen broke through a few red shirt sleeves from close range, but Carbery kept the Irish side at bay.

Carbery continued adding to the scoreboard. Peter O'Mahony became man of match and got on with the more mundane work. The Ireland flanker made several crucial tackles and was a constant thorn for Exeter at the breakdown.

O'Mahony, Carbery and O'Mahony were unavailable for the first leg – but both contributed crucially here.

With eight minutes remaining, Carbery, the fly-half, has already scored all of Munster’s second-leg points.

Exeter's 2020 Champions Cup victory was held behind closed doors due to Covid lockdown. They will regret not having put the contest to bed last weekend in front of their loud home support in south west England.