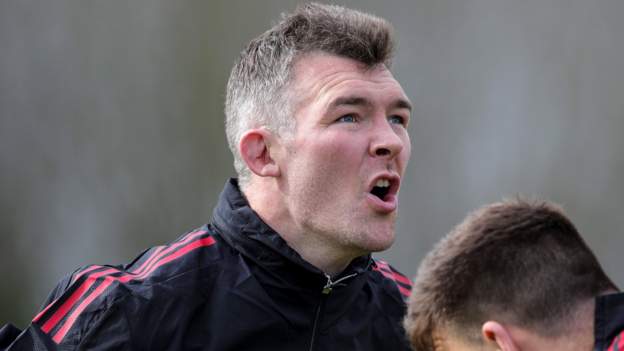 Peter O'Mahony from Ireland will be the back row captain of Munster in Saturday's European Champions Cup Second Leg at Thomond Park.

O'Mahony will be back with Joey Carbery and Josh Wycherley, John Ryan, Simon Zebo, and John Ryan.

Following a stressful first leg at Sandy Park, Exeter has a slim advantage of 13-8

In the only change to the first leg, the Chiefs will not be playing England and Lions number eight Sam Simmonds.

Johann van Graan, the head coach, will be replacing by Graham Rowntree at the end of the season,He can call four Irish internationals to his Munster side. This will allow him to overcome a five-point deficit at home.

O'Mahony has returned from a hamstring injury, while Carbery, the fly-half and Zebo, the winger were both injured and unwell.

Mike Haley begins at the full-back, with Keith Earls on one flank and Zebo on the other. Damian de Allende continues his centre partnership with Conor Murray, Carbery in half-backs.

Josh Wycherley, Niall Scannell, John Ryan and Jean Kleyn pack down in the front row. Fineen Wycherley is in the engine room. This is the first time that the Wycherley brothers have started together in Europe.

O'Mahony and John Hodnett complete the starting XV. O'Donoghue moves to no.8 as a positional change.

Exeter will be without eight Simmonds, their European Player of Year for 2019-20, who is currently the leading try scorer at the 2021-22 Champions Cup.

Jannes Kirsten moves to the number eight position on the openside flanker side. Jacques Vermeulen moves to number 8. Tom Gilbert-Hendrickson, Santiago Grondona, and Billy Keast have been restored to the bench.