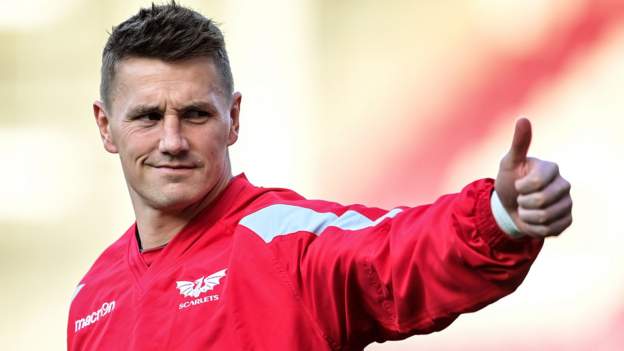 Jonathan Davies, Scarlets' captain, has signed a contract extension with the region.

The Scarlets' centre, which includes the British and Irish Lions centres from Wales and Ireland, has played 180 times in Scarlets' jerseys and scored 51 try.

Davies, 34, has taken over the Scarlets' captaincy from Ken Owens. He is now part of an elite group of international players who have made 100 Test appearances.

Davies said, “Wearing Scarlets jerseys means a lot to us, I grew here in the area,”

Davies spent two seasons at Clermont Auvergne, before returning to Parc y Scarlets for 2016-17. In 2017 he was an integral part the Pro12 title-winning side.

His new Scarlets contract is not yet known.

“The standard of training and ambition to win trophies is admirable. It is a wonderful place to be.

“I supported the club when I was young and got through the academy. It's been a privilege to be a captain of the team.

“It was a challenging season due to many reasons. However, we have two big matches left and still hope to qualify for the Champions Cup and a play off spot.

“We have a healthy crop in the Scarlets who can help them move forward. That competition is driving everyone to raise standards. I look forward to being part in that over the next few years.”

Davies is the latest player to sign a contract after Scott Williams, Sam Lousi and Rhys Patchell.

Dwayne peel, Scarlets head coach said Jon was a “word-class player” who has played at an elite level.

“He's been a great leader this year and has shown the Scarlets what it means to him to play for them.

“I feel that he has risen a level since coming back to us following the Six Nations, and is playing his best rugby in a while.

“He is a player who demands high standards. He is also a role model for our young players.

“It's fantastic that he signed a new contract. We look forward to growing as a company.”