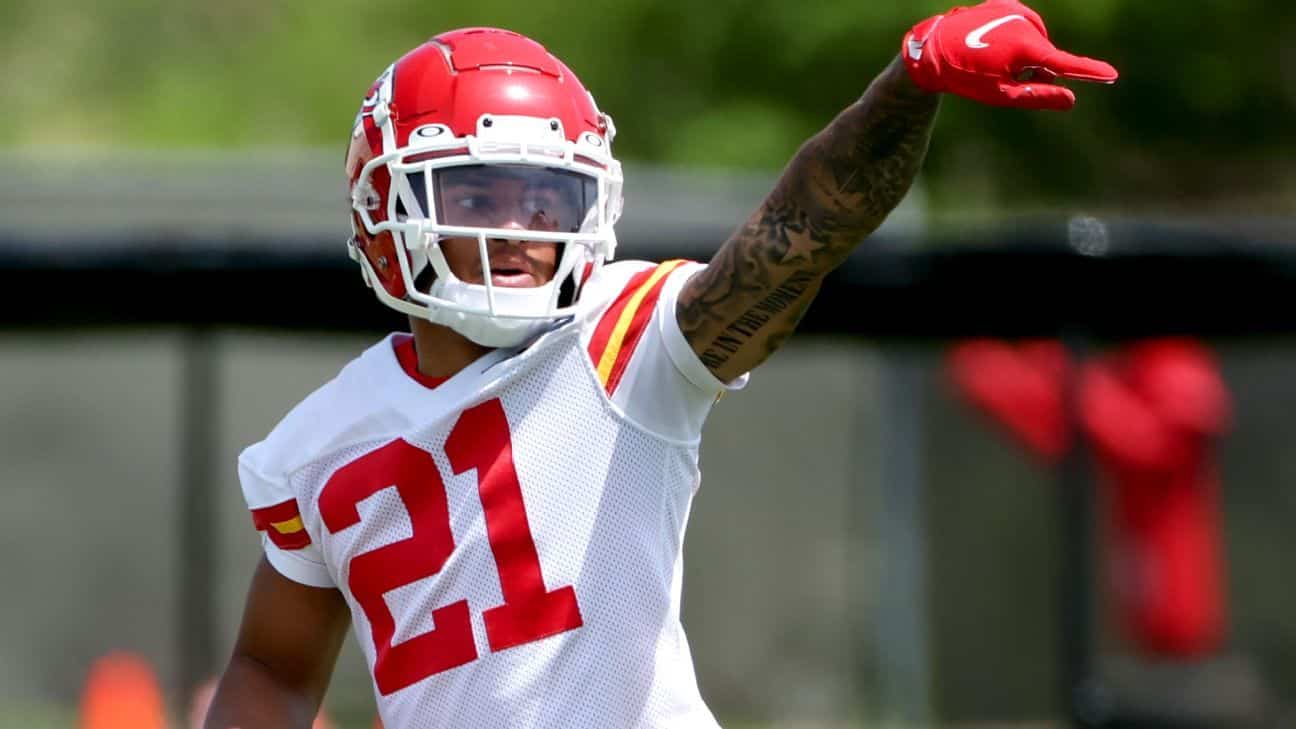 KANSAS CITY (Mo. — Kansas City Chiefs Seven defensive players were selected in this year’s NFL draft. Two of these two were in the first round, which was the first time in franchise history. Many of these players will have an immediate opportunity to make a difference in the team's fortunes. This is something the group doesn't take lightly.

Cornerback said, “This class definitely came to prove a point.” Trent McDuffieThe Chiefs' top draft choice at No. 21 overall. “Everyone is very confident. … They just want to do the hard yards, which I know I can do. It's a great experience to be a part of this.

McDuffie, along with his fellow first-year defensive players, is in the race for the Chiefs' regular-season opener at the Coliseum on Sept. 11. Arizona Cardinals. The Chiefs are now halfway through their offseason practice. They will then gather in late July to begin training camp.

In many cases, they have turned to rookies to replace them. McDuffie, defensive end George KarlaftisCornerback Joshua WilliamsSafety Bryan Cook Linebacker Leo Chenal Are among the first-year defensive player to get a strong start in offseason practice.

Steve Spagnuolo has much to prove them to his defensive coordinator. Spagnuolo has seen rookies repeatedly prove themselves before putting them in their place in the Chiefs' lineup. With so many Chiefs rookies on their defense, he may have to compromise this notion.

Spagnuolo explained that “we're going to need to live with some growing discomforts.” “I believe this. We can overcome it. However, I believe that this is the only way to get it there. Some guys will need to step up to play. It is time to learn more about the men we currently have. Coaching is difficult. What can this guy do for us? Is he capable of doing the same thing as last year? It could be. It will take time.

“I throw a lot of stuff at them right now. For a reason, the volume is so high right now. Find out who is able to handle it. … You will make mistakes that we normally wouldn't.

The Chiefs had a lot of free-agent additions to their roster this year, many of them on offense. Their safety was their only significant veteran addition on defense. Justin Reid. It's no coincidence that they spent so much on defense during the draft.

General manager Brett Veach stated that balance is important on both the offensive and defensive sides. He also said that he wanted to improve the youth, talent, and depth of the defense. “We did some offensive things in free agency. We brought in [wide receivers] JuJu [Smith-Schuster] We brought in MVS [Marquez Valdes-Scantling] We brought them in [running back Ronald Jones].

“Although the draft was more geared toward defense, I believe it's a mixture of us wanting to get better and deeper and younger. But had we not been able to sign the Smith-Schusters and the MVSes and the RoJos, it maybe deviates a little.”

Spagnuolo has been a teacher since childhood and is often seen working side-by-side with players at practice. Spagnuolo is still an excellent teacher. Williams, a fourth round draft pick, was pulled aside by him at a practice last Thursday to demonstrate an improvement over a technique Williams had used during coverage of the previous play.

Cook, a second-round draft selection, stated that Cook “does a great deal of explaining what it is he requires you to do.” It is not rocket science. Many coaches and teammates help with the transition. It isn't as hard as it seems. It's overwhelming when you arrive. It's not all bad. It is possible to solve it.

“I think that we are all in this boat together. We are back to [being] Again, a freshman trying to figure things out. Now is the grind. It's time now to get to know your teammates and coaches, establish your self and show respect. Also, figure out how best you can prepare yourself for the first year.