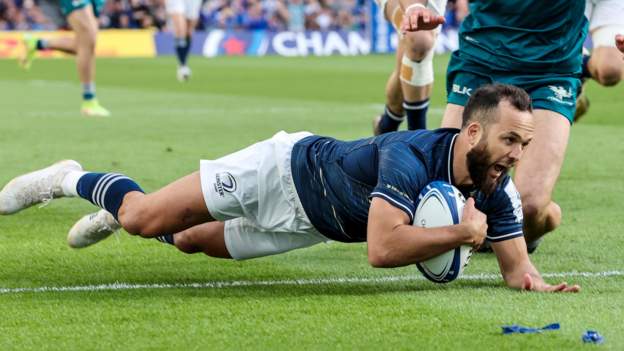 Leinster won 56-20 against Connacht to reach the Champions Cup quarter-finals at Aviva Stadium.

Jamison Gibbon-Park and Tadhg furlong scored also for Leo Cullen’s side. They will face Clermont or Leicester at the last eight.

Connacht won the tie with Carty shortly thereafter, but Carty pulled off a fairly straightforward win.

Connacht made a strong start, but Leinster scored the first try after 11 minutes.

Henshaw was able to quickly release Josh Murphy, a rampaging wingman, from the net. Lowe received the ball on the inside from the lock, and Gibson-Park was sent in unaffected. Johnny Sexton added the extras.

Only eight minutes after Henshaw had passed Bundee Aki, former teammate, the four-time European champions got their second attempt at the game.

Furlong's third try came at close range. After some excellent link play between Lowe, Josh Van der Flier, Furlong managed to get over the line in 28 minutes.

Connacht's problems got worse five minutes before the half-time break when Aki was given a yellow card. Lowe managed to get over Sexton's soft hands.

Leinster continued where they left off after the resumption, when Henshaw completed his second following excellent work by Jimmy O'Brien.

Connacht was able to respond in 46 minutes, when Carty put O'Halloran full back for their first attempt of the game.

Leinster punished their interprovincial rivals when Garry Ringrose broke through after 55 minutes. Lowe was able to take Lowe's long pass for another try.

Connacht was restored to their full complement and responded with a well-taken attempt by replacement Arnold on 62 minute. However, Leinster were relentless. Lowe added two more tries either side Papali’i's score, as Leinster made an ominous statement.