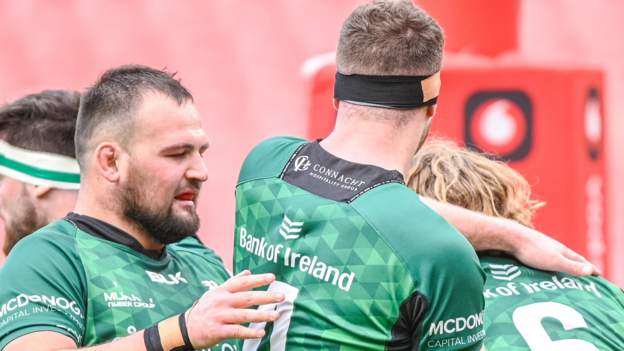 Connacht was the first Irish team to win on South African soil with a convincing 33-30 victory over the Lions at Johannesburg.

Jack Carty scored the winning penalty for the Lions in the 76th minute. This was after they had overcome a 12-point deficit.

Connacht was in control of the game from the start, scoring two tries in 10 minutes.

But the hosts came back and scored four additional tries to claim two bonus points.

Connacht's win kept them mathematically in contention for a spot in the United Rugby Championship playoffs. However, a top eight finish seems impossible as they would need maximum points from the remaining two games and overturn a huge points gap.

Andy Friend's side performed a remarkable performance, finishing 14-0 up after Cian Prendergast. Also, a penalty try was awarded to Ruan Dreyer for collapsing a driving maul.

Connacht's forward was sent to sin-bin by the Lions, but Connacht couldn’t capitalize further. Connacht cut the arrears shortly before the break when RabzMaxwane completed in the corner following a quick Wandisile Simelane stop.

Ireland international Carty kicked exceptionally for the visitors. Connacht's defence was unable to stop Connacht from adding six more points after each interval.

The province was eventually caught by Morne van den Berg's quick-thinking, which saw the scrum-half move over from a tap and go.

Connacht once more rallied and scored a third-try through Tom Daly to extend their lead to 12 points with 15 minutes remaining.

After beating Munster in February at home, the Lions found another gear and were able to go over twice in just four minutes through Edwill van der Merwe, captain Burger Odendaal, and finally got level.

After missing his first kick just four minutes before, Carty regrouped to score a late penalty that gave his team the victory.