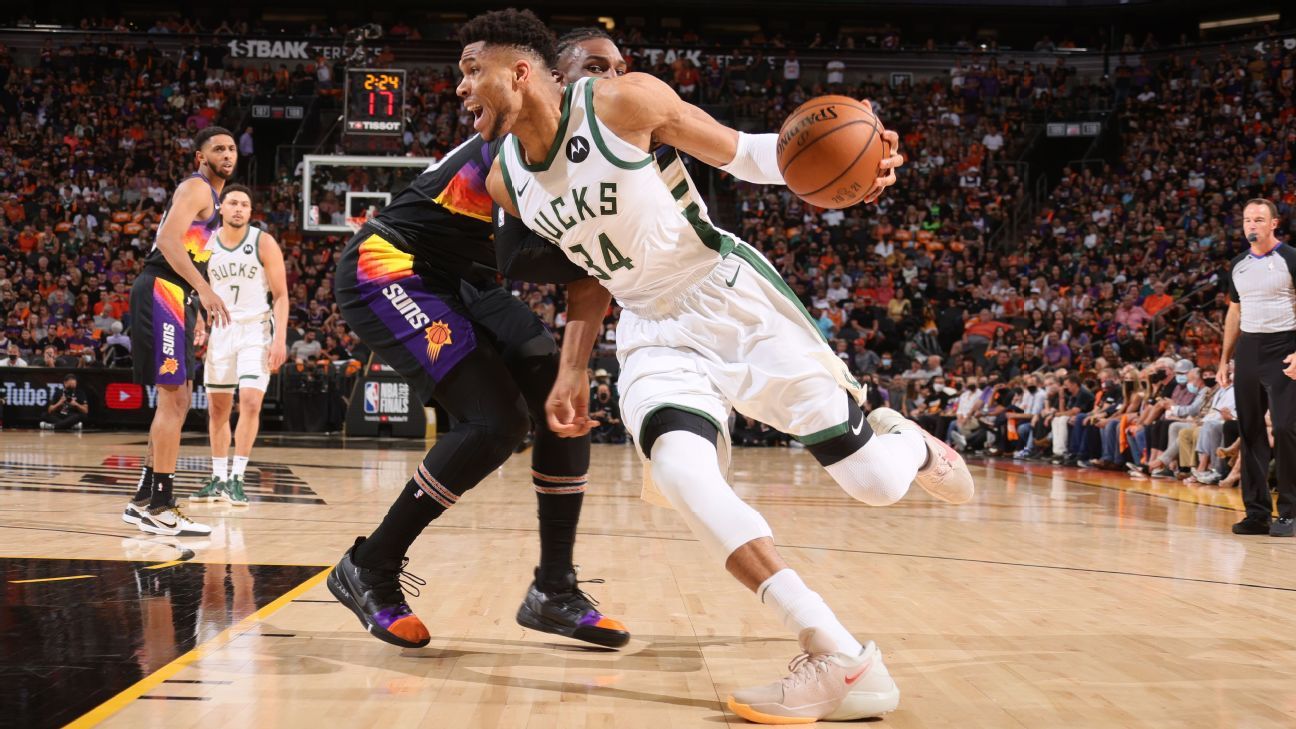 When Giannis Antetokounmpo fell to the floor in Game 4 of the Eastern Conference finals after his knee twisted in a gruesome fashion, he said his immediate thought was that not only was this season over – but that next season was, too.

“I thought I would be out for a year,” Antetokounmpo said.

Instead, Antetokounmpo was only out for a week, and was able to return for Game 1 of the NBA Finals on Tuesday night against the Phoenix Suns. And while Antetokounmpo's Milwaukee Bucks lost to the Suns 118-105 to begin the seven-game series, all the superstar forward could focus on was that he was able to be on the court and playing alongside his teammates.

“It was tough,” Anteotkounmpo said, describing what he went through over the past week to return to the court. “Obviously I had to do my best to get back. Listen to my medical staff. I did the right treatment. Took care of my body and supported my teammates, and now I'm back.”

Antetokounmpo suffered a hyperextended left knee on that awkward and ugly-looking fall a week ago in Atlanta against the Hawks. But on Tuesday night, he said the knee felt stable and free of pain as he finished with 20 points, 17 rebounds, four assists, a steal and two blocks in 35 minutes, going 6-for-11 from the field and 7-for-12 from the free throw line.

Initially, Antetokounmpo said, he thought he'd be out for a year, and only didn't believe that would be the case after an MRI last Wednesday ruled out any long-term issues.

“I couldn't walk, and my knee was like double the size,” Antetokounmpo said. “Usually I never swell up. But you know, I woke up the next day, did whatever it's called, MRI or X-ray — I don't know what it's called — and they said I'm good. And I was like, ‘Thank God.'

“I'm not trying to make it about me, and hopefully in Game 2, I'll feel better.”

Antetokounmpo was listed as doubtful prior to Games 5 and 6 of the East finals, with Milwaukee ruling him out of both games hours prior to tipoff. On Tuesday, however, Antetokounmpo — after getting round-the-clock treatment for the past several days — was upgraded from doubtful to questionable on the league's initial injury report.

Then, about two hours before the game, Antetokounmpo was on the court testing out his knee, going through some shooting and dribbling drills to see if it would feel good enough to go against the Suns.

Ultimately, it was decided, he did.

“He had a good workout before the game,” Bucks coach Mike Budenholzer said. “You've got to listen to Giannis first. He felt good. The sports performance group felt good … he had been checking boxes the last couple days and making progress and so he was cleared, and he wanted to go and everybody was on the same page.

“It's just a credit to him … the work he puts in, the work the sports performance group puts in.

“For him to be back playing in Game 1, it's really impressive what he did.”

For others, though, — namely the Suns — it was no surprise that Antetokounmpo was playing.

“We planned for him to play,” Suns coach Monty Williams said. “Just felt like a guy like Giannis, who all the stories report about how hard he works on his body, we just figured a guy that works that hard is going to find a way to get back on the floor, especially in the Finals.

“This is the time of the year where you sacrifice everything, and that's what we expected.”

Not only was Antetokounmpo playing, but he didn't look like he'd missed any time at all. That was certainly the case on the first offensive possession of the game, when he rolled to the rim and drew a foul on Suns forward Jae Crowder when he went up and corralled a lob for what would've been a dunk.

Antetokounmpo then assisted on a Brook Lopez bucket, and scored on a jumper shortly after that. By the end of the first quarter, he'd already racked up eight points, five rebounds and two assists, and he had 10 points, nine rebounds and three assists by halftime, showing no ill-effects from his injury. That included blasting his way to the rim through both Suns center Deandre Ayton and Crowder at times, showing his trademark combination of power and speed, and one remarkable chasedown block on Mikal Bridges defensively, where he appeared out of nowhere to swat his layup attempt off the backboard.

But from the 5:19 mark of the second quarter to the 4:49 mark of the third, the Suns outscored the Bucks 33-17, as Milwaukee struggled to contain Phoenix offensively. Chris Paul and Devin Booker tortured Lopez on switches, getting him isolated time and again for jumpers they could calmly walk into.

“I think I could have done a better job in trusting my teammates more behind me and try to make them put the ball on the floor more,” Lopez said.

Paul finished with 32 points on 12-for-19 shooting to go with nine assists, while Booker had 27 points and made more free throws by himself (10) than the Bucks as a team (9). Milwaukee's counterparts in the backcourt, Khris Middleton and Jrue Holiday, weren't as effective. Middleton wound up with 29 points, but took 26 shots to get there – and didn't attempt a single free throw. Holiday, meanwhile, had 10 points, seven rebounds and nine assists, but shot just 4-for-14 from the field and missed all four 3-pointers he attempted.

“I think I had a bad shooting night,” Holiday said. “I had a lot of opportunities to make layups and shots and they weren't falling. Again, I think I do a little bit more than scoring, just getting people plays and threes and driving to the basket, but me personally, I didn't shoot well tonight.”

After falling behind by as many as 20 points in the second half, Milwaukee was able to cut its deficit all the way down to 101-94 with 7:16 remaining after an Antetokounmpo layup following a Bryn Forbes missed 3-pointer.

But Phoenix responded with a 13-6 run — capped by Paul converting an and-one layup against Antetokounmpo after expertly ducking in front of him on a move to the basket — that pushed the lead back to 14 points and all but ended the game.

The crowd in Phoenix also continued what has been a consistent theme since Milwaukee survived a seven-game series against the Brooklyn Nets in the Eastern Conference semifinals: counting out the seconds Antetokounmpo takes on every one of his free throws. Antetokounmpo, who entered Tuesday's game shooting 53.7 percent from the free throw line, went 7-for-12 from the line in Game 1.

“But as I said, I've learned to embrace it. Like I know it's not going to stop. You know, at the end of the day, when it keeps going, like it fades away. You know, there's times that the first free throw I hear it but the fifth one, sixth one, I'm not hearing it no more and I'm just focusing on what I've got to do and my routine.”