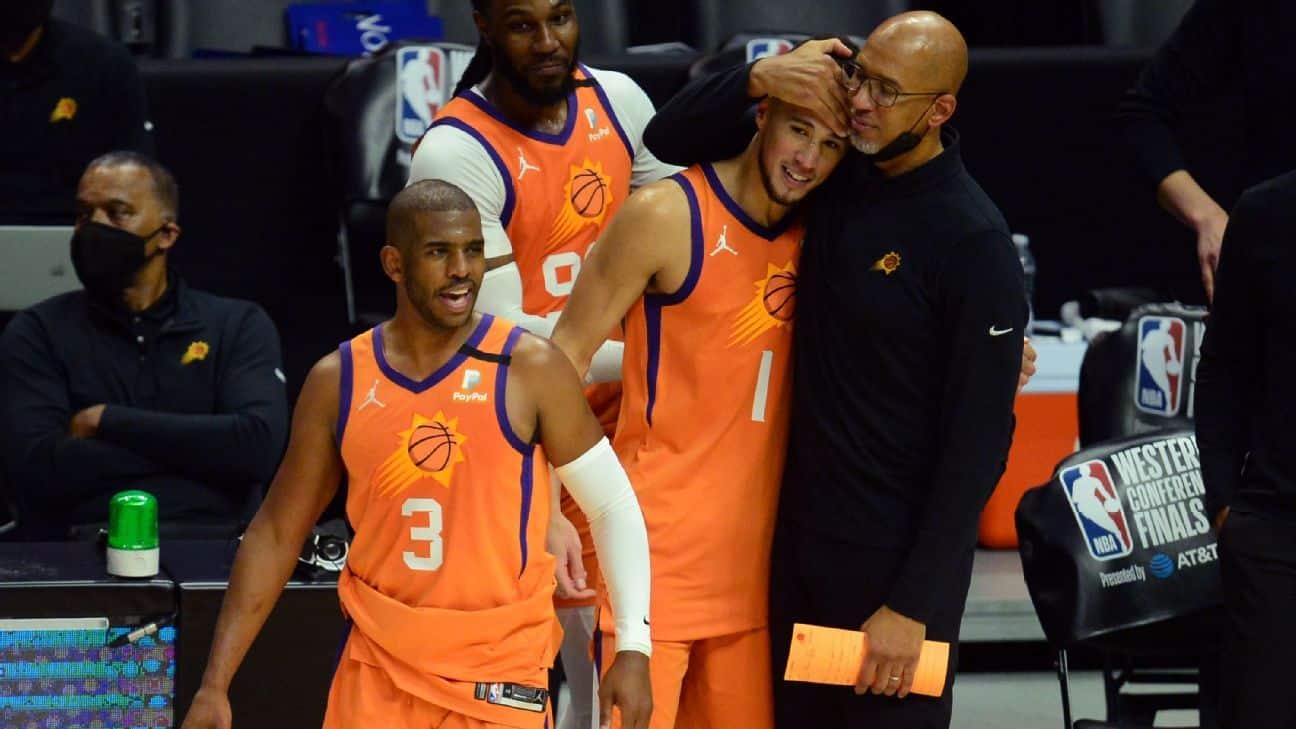 The conference finals have come to an end, as the Phoenix Suns and the Milwaukee Bucks will face off in the NBA Finals.

For the Suns, Chris Paul‘s virtuoso 41-point performance in Game 6 sealed the fate of a short-handed LA Clippers squad that fought valiantly in defeat. Paul, who will make his first Finals appearance in his 16-year NBA career, shot an impressive 16-of-24 from the field and posted 8 assists and 4 rebounds in the win.

The Clippers bow out with their heads held high, as a dogged campaign marked the longest postseason run in franchise history. Without Kawhi Leonard, Paul George admirably picked up the slack, averaging over 41 minutes and 28 points per game in the series.

The Bucks, who lost Giannis Antetokounmpo to a knee injury in Game 4, saw Khris Middleton and Jrue Holiday step up big to secure the series over the Atlanta Hawks. The duo averaged 55 points in the Bucks' last two games, both wins, securing the franchise's return to the NBA Finals for the first time since a loss in seven games to the Boston Celtics in 1974.

So, which star was most valuable during the conference finals?

Is it Devin Booker, who played like a superstar throughout the entire Suns-Clippers series? What about Middleton, who turned in some of his best playoff performances after Antetokounmpo went down with a knee injury? How high will big performances from George and Paul rate them on this list?

Our panel of NBA experts makes its picks.

A lot of times, you get an idea of a player's value most when they're not there. And in this series, without Chris Paul for the opening two games, the Suns actually won both.

But don't let that convince you that Paul's presence wasn't part of those first two wins. From watching games on FaceTime with head coach Monty Williams at night for extra scouting, to possibly texting his brother CJ adjustments while he sat courtside in Game 1, to FaceTiming the team seconds after the final buzzer, Paul was an active part of the team. And as Devin Booker and Cameron Payne talked about, Paul's influence over style of play and expectation of taking care of the ball was in their minds.

When Paul returned, he showed signs of rust after missing almost two weeks of games and practices in the league's health and safety protocols. He struggled to find his rhythm with his midrange jumper, hitting the front iron on seemingly almost every shot, as the Clippers clawed back in the series.

It had the potential to be the ultimate letdown in Paul's career: a 3-1 series lead blown, and against a team missing its best player.

But on the road, in his old confines of Staples Center, Paul orchestrated brilliance in closing out the Clippers. With 41 points and the kind of ruthless daggering that eventually broke Patrick Beverley‘s spirit, Paul led his team to the Finals, finally.

When the Bucks needed him most in the conference finals, Middleton was at his best. The first call to Middleton came during the fourth quarter of Game 3, when he played the familiar role of closer down the stretch.

Milwaukee entered the fourth quarter down two on the road in a series tied 1-1. Middleton's shot-making helped keep Atlanta from taking a series lead. He outscored the Hawks 20-17 in the final period all by himself, knocking down eight of his 13 shot attempts — half of his makes and nearly half of his attempts coming from beyond the arc. As a result, with Hawks star Trae Young limited by a foot injury, the Bucks won Game 3 going away.

Overall, Middleton's 38 points in Game 3 tied his effort in Game 6 of the previous round against the Brooklyn Nets for his most points in a playoff game, and his six 3s were his second most in his playoff career.

After a poor-shooting Game 4 (16 points on 6-of-17 from the field), Middleton stepped up again after Giannis Antetokounmpo went out of the lineup in the second half of that game with a left knee injury that would sideline him the rest of the series. In Giannis' absence, Middleton averaged 29 points, 12 rebounds and 7.5 assists to lead Milwaukee to wins in Games 5 and 6 to close out Atlanta.

During the clinching Game 6, Middleton helped the Bucks wrest control with a dominant performance during the third quarter. He had 23 points on 8-of-12 shooting in the period, including four 3-pointers, as Milwaukee turned a narrow four-point advantage at halftime into a commanding 19-point lead heading into the final quarter. Over one sizzling stretch early in the period, Middleton scored 13 points in five possessions over barely more than two minutes. The Hawks never really recovered.

Mask on or mask off, it didn't seem to hold back Booker from continuing to change his reputation from a perceived empty stats guy to one who could help lead his team to the NBA Finals.

In his first five NBA seasons, Booker had his detractors who never thought he'd be able to lead a team to a playoff series victory, let alone make it all the way through the Western Conference.

That perception started to change last season in the bubble when Booker helped lead Phoenix to an 8-0 record even though the Suns came up just short of the West's play-in tournament. There were many who thought that same play-in tournament was going to be where the Suns would end up this season, but they shattered all expectations on their way to a 51-21 record, the second-best mark in the league.

Booker got things started on the right foot in the conference finals against the LA Clippers by dropping his first NBA triple-double: 40 points, 13 rebounds and 11 assists. Oh, and he did it all while point guard Chris Paul missed the game because of health and safety protocols.

Without Paul, Booker shouldered much of the scoring load down the stretch as he scored or assisted on 43 of the Suns' final 50 points to help put the game away.

It was in Game 2 when Booker broke his nose in three spots after a head-to-head collision with Clippers guard Patrick Beverley. Starting in Game 3, Booker took to wearing a protective mask on his face and his shooting dipped as a result.

Sometimes he'd play with the mask; sometimes he'd ditch it. Overall, he shot 35.2% and was 6-of-25 from 3-point range in the final four games of the series, but he still managed to play nearly 41 minutes a game and average 23.3 points — and he got to the line 22 times in Games 4 and 5 alone.

If anything, George's postseason was an overwhelming success because no one can now make a Playoff P joke in good faith.

George's series against the Suns was a display in personal resiliency, as he took on the burden of Kawhi Leonard's absence to keep alive his team's chance to advance to the Finals. George's numbers were stellar — 28.7 points, 10.5 rebounds and 5.5 assists while playing an absurd 41.2 minutes per game — but beyond that, he helped reforge an identity for the Clippers of toughness and defense.

Without Leonard, George was obviously relied upon in a more direct, alpha dog role, but the Clippers also adapted to playing a more democratic style, spacing the floor and relying on ball movement. George thrives in settings with space and movement, always searching for a rhythm and feel in every game. When George gets that rhythm, he can transform into one of the five or six best players in the world, tapping into a two-way ability that makes him elite.

It wasn't quite enough, and the Clippers fell in six games, but George's series might've also reset the table for the franchise going forward. Leonard is a free agent, and a month ago there were a lot of questions about his future. But after George and the rest of the team put up such a fight, the core of the Clippers appears much better today than it did then.

Although Giannis was supporting his teammates from the bench as the Bucks won Games 5 and 6 to reach the NBA Finals due to the knee injury he suffered in the second half of Game 4, Milwaukee would not have been in position to win the series without him. Remarkably, despite missing more than a game, he still led all players in the East finals in my wins above replacement player (WARP) metric ahead of Game 6.

Over the three full games he played in the series, Antetokounmpo averaged 30.7 PPG on 59% shooting, plus 10.7 rebounds and 6.3 assists. Perhaps his best performance was in Game 2, when he scored 25 points in just 29 minutes of action in the Bucks' blowout win, making 11 of his 18 shot attempts. In that game, Giannis' spin move befuddled Hawks defenders, allowing him to repeatedly get to the rim.

Game 3 was emblematic of Antetokounmpo's impact. Before Middleton could bring Milwaukee home with his fourth-quarter outburst, Giannis was the reason the Bucks were still in the game. He had a double-double of 28 points and 11 boards through three quarters before taking a backseat to Middleton and making both of his shot attempts in the final period.

Even in Milwaukee's Game 1 loss, Antetokounmpo was outstanding. He came within an assist of what would have been his second career playoff triple-double and scored a team-high 34 points on 14-of-25 shooting. Giannis' 31.5 game score in that performance was his fourth best in a playoff game, per Basketball-Reference.com.