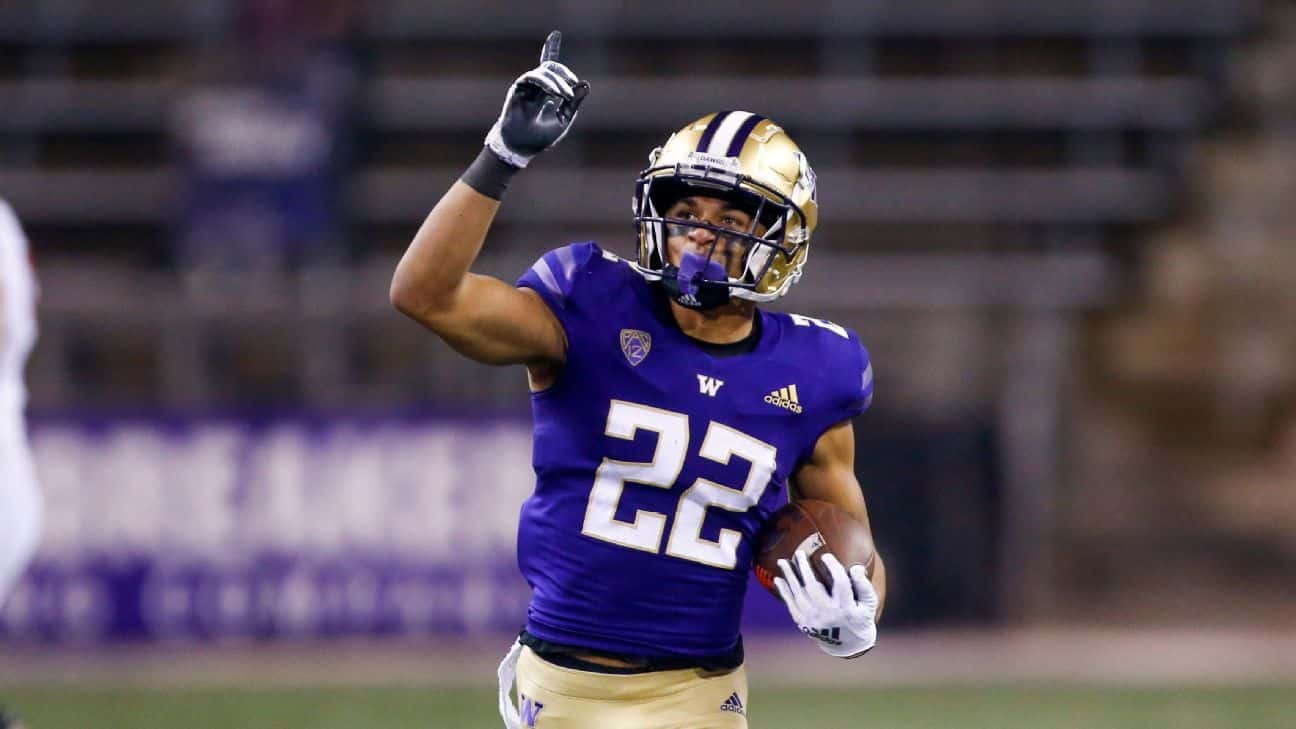 1. Moment of truth Patriots Hall of Famer and current ESPN analyst Tedy Bruschi sometimes refers to the “moment of truth” when it comes to what will unfold Thursday night in Round 1 of the NFL draft (ESPN, 8 p.m. ET). All eight teams, including the Patriots, were represented by his beloved Patriots who had eight overall picks during the three-day event. 21 will be the last to give their verdict after months of speculation and media coverage.

Best guess? Bill Belichick is going to work hard to trade down the first round.

The Patriots' coach could pull off something like 2020 when Belichick sent No. 23 Los Angeles ChargersIn exchange for a high second rounder (37) or third-rounder (71) — this might be considered ideal. The Patriots chose promising safety Kyle DuggerAt 37, he traded 71 to be an athletic linebacker. Josh Uche.

Belichick frequently states that the team must be prepared to choose at its assigned slot because there isn’t always a trading partner. Many NFL general managers have experienced this type of situation.

“The jokes were always like, ‘Somebody call in on the trade line and make sure it’s working’ or ‘pick up the line and make sure it still has a dial tone because it would be nice to move off this pick,'” said Mark Dominick, the former Tampa Bay BuccaneersGeneral manager and current Sirius XM analyst. “It doesn’t always work out the way you hope it would.”

Dominik was No. 20 debating between defensive linemen Adrian Clayborn and Cameron Jordan. He wanted to be able to live lower, spend more time assessing and maximizing a deep D line class while also gaining another second- or three-rounder. Clayborn won, and he was able to leave the phone ringing.

Using Dominik’s story as a springboard, here are a handful of prospects who stand out to this reporter as top Patriots targets this year:

DB Daxton Hill (Michigan):A versatile safety/corner who could possibly be trained to take over Devin McCourty’s deep center-field role in future. He might not meet the immediate need, but would bring long-term value.

DT Travis Jones (UConn):Georgia's Jordan DavisAlthough it would be the ideal scenario, Jones, at 6'4 and 325 pounds, wouldn't be a bad consolation prize. He was strong at Senior Bowl and, as Belichick stated in the past: Players with this type of size, power, and athleticism are rare.

LB Devin Lloyd (Utah):The team chose Jerod Mayo, an off-the-ball linebacker, 10th in 2008, and immediately inserted him into the lineup. Lloyd, 6'2″ and 237 lbs, could do the exact same thing.

CB Trent McDuffie (Washington): He doesn’t have off-the-charts size and length (5-10, 193), but he seems to have everything else the Patriots covet (intelligence, willing tackler, versatility). He was reportedly among the team’s pre-draft visitors, but might not be there at 21. Florida corner Kaiir ElamIt also suits the bill.

LB Chad Muma (Wyoming): He could be this year’s Dugger in terms of a player the team might have selected in the first round if they didn’t find a trade partner, but was still able to select him early on Day 2.

WR Jameson Williams (Alabama): He likely wouldn’t be in the conversation if he wasn’t coming off a torn ACL, and it’s possible he’s still gone well before pick 21 (similar to another projected WR target, Ohio State's Chris Olave). But in making the point that the Patriots need more dynamic difference-makers, NFL Network analyst Daniel Jeremiah highlighted him as a “home run pick” if he’s there.

2. Timing at 21If the Patriots pick No. 21 at 10:50 p.m. ET. ET. This is around the time that the Indianapolis Colts made pass-rusher Kwity PayeThey chose 21 from last year. Plan accordingly.

3. Parker’s change: Veteran receiver DeVante ParkerIn his seven-year history, he has not played in all of a season. He is coming off a year where he only appeared in 10 games. His inability to be available is one of his biggest handicaps (similar to tight end). Hunter HenryLast year. Asked Thursday if he’s doing anything different this offseason to keep himself on the field, Parker said: “I’m doing a lot more running than I have been doing in the past. That’s something I’m trying to harp on.”

4. No N’Keal: Parker’s arrival seemed to signal the end of the road for 2019 first-round draft choice N’Keal Harry, and the first week of the team’s voluntary offseason program amplified that point, with Harry notably choosing not to be in town. Harry had shared his whereabouts on Instagram, and those around the Patriots’ program this week confirmed he wasn’t in Foxborough.

5. Tie the knot with your home townBoston College guard Alec Lindstrom, who projects as a Day 3 draft pick (Rounds 4-7), got a chance to envision what it would be like to play for the Patriots when he was among a small group of local prospects to visit the team’s facility earlier this month. Lindstrom is from Dudley, Massachusetts, went to high school at Shepherd Hill (playing in a Super Bowl as a freshman at the Patriots’ home stadium, and has spent time working out with former Patriots O-line coach Dante Scarnecchia since December.

“Obviously growing up, I was a huge Patriots fan, a huge Tom Brady fan,” said Lindstrom, the brother of Atlanta FalconsGuard Chris LindstromA 2019 first-round selection. “Just being able to go there, knowing there is a possibility I could play for the hometown team, is special. Coach Belichick, this is someone I’ve been watching since I was a little kid, winning Super Bowls. Being able to showcase my skills in front of him, for a chance to be drafted, is an unreal feeling and experience.”

6. Talent mining:The Patriots are known for their ability to take on every talent rock. They hosted Joshua Onujiogu from Division III Framingham (Mass.) as a reminder. University for a predraft visit. Onujiogu is a 6-foot-3 and 250-pound defensive linebacker/defensive end. He hails from Wareham in Massachusetts and was the 2019-2021 Massachusetts State Collegiate Athletic Conference Defensive Players of the Year (13.5sacks). Joe Linta from Connecticut, who has a history supporting players in lower divisions that might otherwise go overlooked, helped Onujiogu to land on the NFL radar.

7. Taylor made: One week into the Patriots’ voluntary offseason program, word is third-year running back J.J. TaylorLooks noticeably larger. Taylor stands at 5'6 and weighs 185 pounds. While his willingness to take on blitzing linebackers was never in doubt, it seems that he may now be physically more capable of handling those duties. This could prove crucial as he vies for a spot on the roster. Damien Harris Rhamondre StevensonHowever, they may also be vying for control James White’s role as the passing back.

8. Parcells follow up:While Bill Parcells is a four-time finalist in the Patriots Hall of Fame, he was not selected this year. And even when he’s been a finalist as selected by the nomination committee, he’s fallen well short in the fan vote to gain induction. Parcells’ candidacy is annually among the most polarizing with the nomination committee and fan base (this piece from 2014 sums it up), and with increased competition in the years to come, I view Parcells’ candidacy as decisively stuck in neutral … barring a Hail Mary.

9. Kidd’s game: As the Patriots personnel department hired a younger group of scouts in recent years, the group benefitted from the veteran expertise of Keith Kidd, the team’s former director of pro scouting (2002-2005) who returned in an under-the-radar professor-type role. In essence, Kidd helped teach the Patriots’ system and some of the finer points of scouting, giving them a valuable resource in the early parts of their careers. Kidd now works for the Raiders as director of scout and development.

10. Did you know? Since Belichick joined the Patriots in 2000, he’s made 83 draft-day trades, which easily leads the NFL. The Philadelphia EaglesWith 64, they are second.