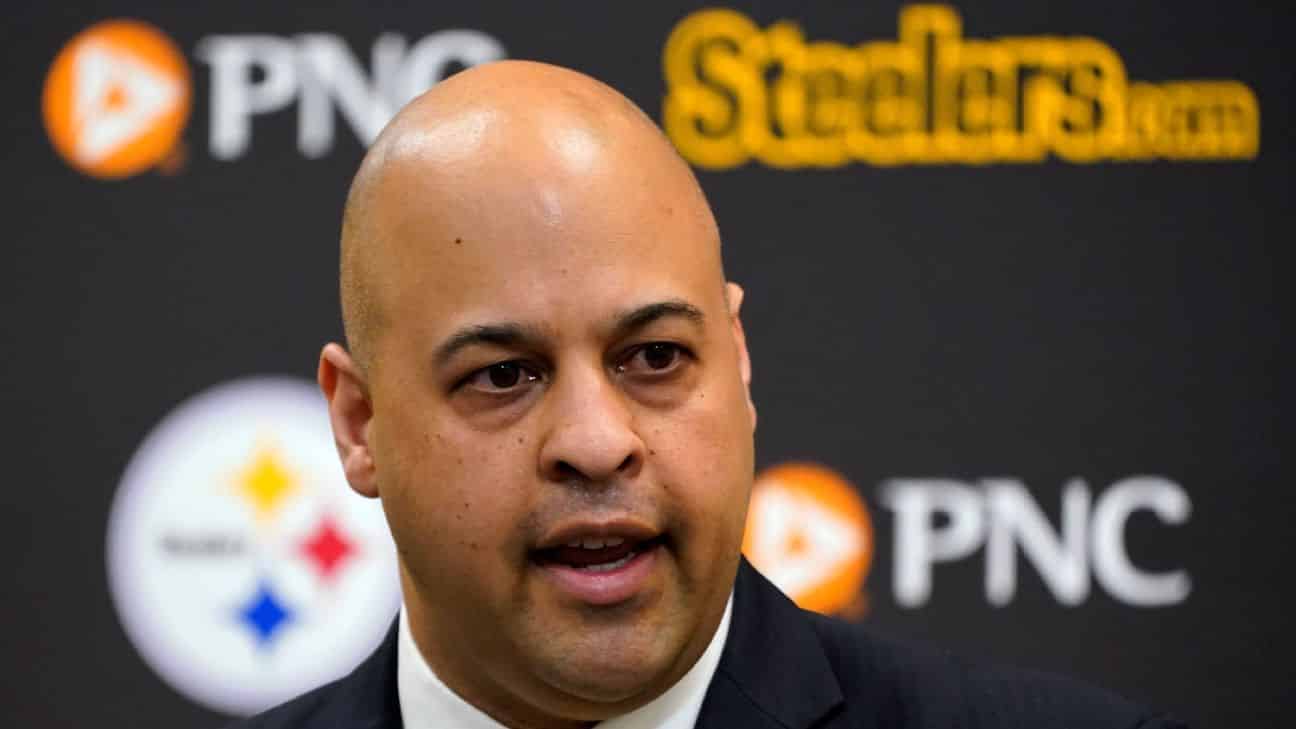 PITTSBURGH — Omar Khan tried hard to keep his smile in check when Art Rooney II gave him the news.

However, just minutes after the acceptance of the Pittsburgh Steelers Khan was unable to contain his emotions in the general manager position.

Khan stated Friday, “When I was sitting with Art and he said to me, and I tried to control myself from smiling too often,” Khan added. “I was so, very thrilled. It was an amazing experience. On the way out, I gave him a hug. It's awesome.”

Khan, 45 years old, was appointed as the next general manger earlier this week. Khan succeeded Kevin Colbert who has been with the company for over two decades, mostly in football administration and business management roles.

Rooney stated, “Obviously, the guy we chose was someone we know very well.” “Excited to know Omar, Omar is familiar with us and I think it will be a very smooth transition.”

Khan, the Steelers' first general manger without a background in talent evaluation since 1970s, doesn't expect much to change in the way he and the Steelers operate.

Khan stated that he believes it will be an easy transition. “Coach T (Mike Tomlin), and I have enjoyed a wonderful relationship over the past 16 years. We have shared many things together. We've shared a lot of time together. It will be a smooth transition.”

Steelers hired Khan with a familiar face but a fresh approach to hiring him, marrying the past and the future.

Khan stated, “I am confident that time will prove this was the right choice for this franchise.” “I'm excited. I can assure you that I do not take anything for granted. I am aware of the expectations associated with this job. I can guarantee everyone that the expectations I have for myself are higher than mine.”

Khan is a New Orleans native and the son of two immigrants. His mother was from Honduras while his father is from India. Realizing that he was not athletic enough to play football, he made it his goal to work in the NFL. He modeled his work ethic on his parents.

Khan spoke out about his parents, saying that today is just as important for them as for him. They were also the ones who had to listen when an 8-, 9, 10-, 12, 12-, 14, year-old child told them that he didn’t wish to become a lawyer. Khan said that he didn’t desire to be an engineer. He wanted to be a doctor.

His start was in the New Orleans Saints organisation in player personnel roles for four years before joining the Steelers.

Khan, the Steelers' vice-president of football and business administration has been the team's top negotiator as well as a salary cap wizard. Khan will continue many of these responsibilities and is also building a team of front office staff members with strong scouting backgrounds.

Khan announced Friday that Khan is going to hire former employees Philadelphia Eagles Andy Weidl, former vice president of player personnel and a native of Pittsburgh, is Andy Weidl. Detroit Lions Sheldon White, vice president of player staff, and Dan Colbert (previously a veteran college scout and pro scout) to a senior position. Khan is yet to announce the titles of his hires. He said that because the situation is fluid, it's not clear if Brandon Hunt and Kevin Colbert will end up on his staff.

Khan stated that he is confident in stating that he has touched every aspect the football operations. Khan added, “I'm confident in stating that I've touched all of them, obviously some more than others.” Khan stated, “But every leader knows his strengths and weaknesses. I won't discuss them here, but I believe that every leader needs smart people to help him succeed.

Khan stated that he would not negotiate contracts during the season. He said this Friday. But he is open for new ideas.

Khan stated, “Anything that could help us improve or win soccer games, we're looking into and utilizing.” “I have some ideas I believe I can implement.”