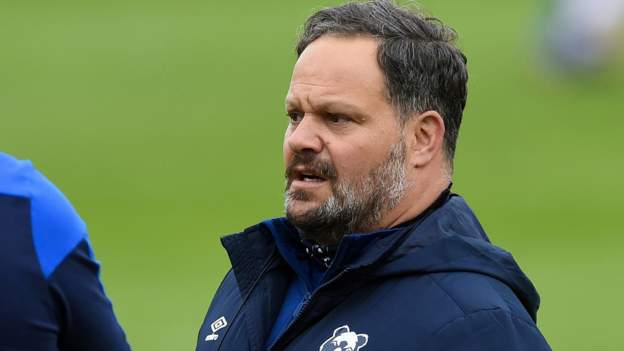 South African Omar Mouneimne has been appointed as the new defence coach by Exeter Chiefs.

Mouneimne, who had been in a similar position with Bristol Bears last month, has moved to Sandy Park by mutual agreement.

Julian Salvi was replaced by him. left Exeter in AprilRob Baxter, director rugby, wants to “bring new ideas within the coaching team”.

Mouneimne, who has more than 15 years coaching experience, will join Exeter in the summer for pre-season preparation.

“It's an honour to be part of a club with the stature of Exeter.” He stated that they are the standard bearers of rugby in England and Europe.

“The blueprint they've created over the years works well, but as with all things you have to change with the times and add bits and pieces.

Rob said that he wanted me to join the team and bring my experience to help move the process forward.

Exeter was not able to make it to this season's playoffs. Despite Saturday's victory, Exeter finished seventh in the Premiership table. 47-38 victory over 2021 champions Harlequins.

Baxter stated, “I have known Omar for some time around the Premiership and knew that he was available. So I met with him and had an excellent meeting.”

“I felt a connection with his energy and the way that he spoke from that meeting.

“It's quite interesting when you see a guy jumping to his feet to describe things defensively in the middle of a café. It's easy for that infectious energy to rub off so I asked other people who worked with him about their work and the effects it had on players. They gave me a lot positive feedback.

“He has a lot experience, whether at club level or international level. I believe this will be very valuable to us.

“Having a fresh voice for players, whether that be in his speech or his challenges, it will be nice to have that little bit of something different.