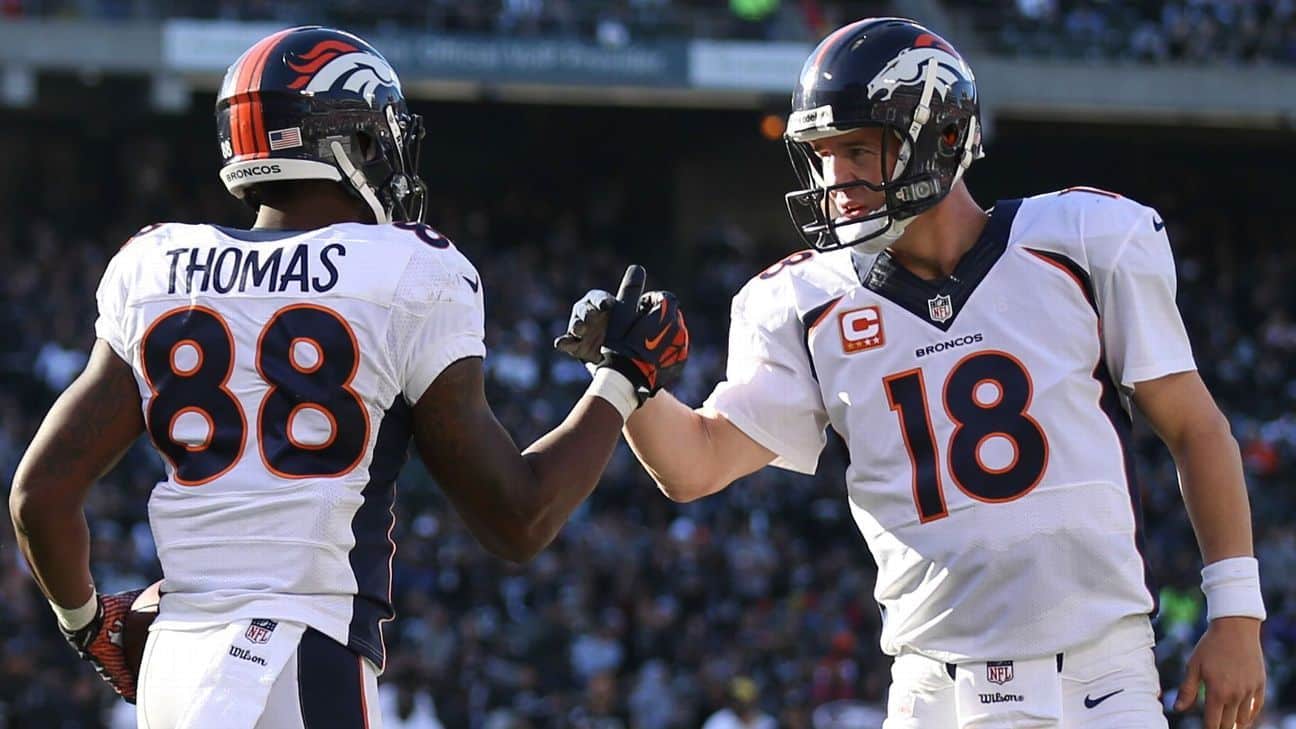 Thomas, a former Georgia Tech wide receiver, and a Georgia native, passed away Dec. 9, at the age of 33.

Manning's PeyBack Foundation created the Demaryius Thomas Scholarship Endowment to award academic scholarships to freshmen from Laurens County in Georgia. Thomas was raised there. Students will be eligible for partial or full scholarships each year, and they will continue to receive them until they graduate at Georgia Tech.

Manning released a statement Wednesday saying that Demetrius Thomas was an “incredibly talented and unselfish colleague, but more importantly, was a special person, and friend.” “My family and me miss him deeply, and we wanted D.T. to be remembered.'s memory, the PeyBack Foundation and Georgia Tech partnered to create the Demaryius Thomas Scholarship Endowment.

Demaryius left a lasting legacy by inspiring the next generation with the same persistence and determination that he used to achieve his dreams. Demaryius' Georgia Tech scholarship will leave a lasting mark on deserving young people from his hometown who can follow his lead and achieve great things.

Georgia Tech also announced Aug. 8 as Demaryius Thomas Day each and every year. Thomas was the school's uniform number No. 8. It will also be announced that the scholarship recipient has been recognized.

“We are thankful to Peyton, Ashley Manning and The PeyBack Foundation that established the Demaryius Thomas scholarship,” Georgia Tech athletic director Todd Stansbury stated in a statement. “Thanks for their generous contributions, Demaryius’ legacy will be carried forward through Georgia Tech students in Laurens County and the surrounding areas for many years. His memory will also be honored each year at our 8/8 Day recognitions.”

Thomas was selected by the team in the first round. Denver BroncosHe was drafted in the 2010 NFL draft. He spent nine seasons with the team including the four seasons in Denver. Rod Smith finished his career as Broncos second-leading receiver (9055 yards), and he is now third in the franchise's history for catches (655), behind Smith (and Hall of Famer Shannon Sharpe).

Thomas was joined by Jerry Rice and Marvin Harrison in the Hall of Fame with at least 90 receptions. RamsTorry Holt was wide receiver and the only player to achieve these totals in four consecutive seasons.

Ten seasons of playing with the Broncos. Houston TexansAnd New York JetsThomas ended his NFL career with 724 receptions for 9,763 yards, and 63 touchdowns.

Thomas, a Georgia Tech player, was a first-team All-ACC selection for 2009 and recorded 113 receptions of 2,135 yards and 13 touchdowns in three seasons.