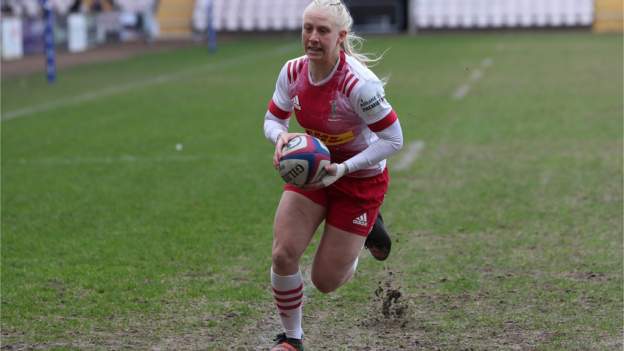 Harlequins, Bristol Bears and Exeter Chiefs have secured the semi-finals of Premier 15s with one round remaining in the regular season.

It's the first time Bristol or Exeter have made it to the playoffs.

Saracens, who had already secured a semi-final spot, were hammered 54-12 by Exeter.

The defeat of Wasps in Gloucester-Hartpury means that both Quins (and the Bears) qualified. The Londoners won their meeting 43-26 at Bristol.

Chiefs were dominant in the opening half against Saracens. Leading 26-5 into half-time, thanks to tries from Flo, Gabby Cantorna, Emily Tuttosi, Chiefs led 26-5.

In the second half, there were four more attempts. Susie Appleby, head coach, said that she was delighted with the performance and that the girls are proud of her.

Heather Cowell, Amy Cokayne and Ellie Kildunne all dotted down as Quins led 22-7 after the break. Sarah Bern of Bristol responded. The dominant Gloucester-Hartpury defeated the wasps 36-7

The Cherry and Whites began the match well, with two quickfire attempts from Natasha Hunt and Neve James. Rachel Lund added another before the break and they led 22-0.

Ellie Underwood was the only one to score Gloucester in the second period. Ellie Boatman scored a consolation goal for Wasps. However, Emma Sing of Gloucester added the final score.

This loss means that Harlequins defeated Bristol and Wasps can't catch the top four points. They will therefore miss the Premier 15s semi-finals.

Loughborough Lightning, which will also be out of the semi-finals, lost 34-24 against Worcester Warriors. Sale Sharks beat DMP Durham Sharks 575-5 in a nine try rout.