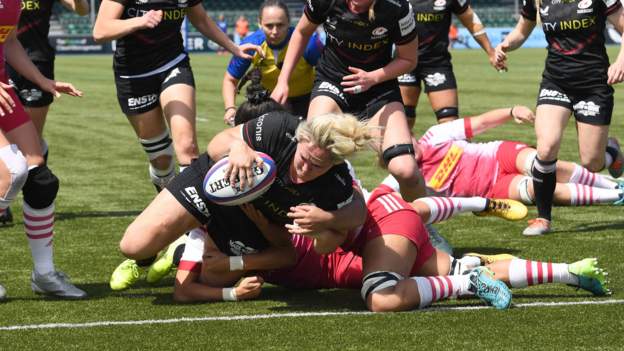 Saracens cruised past defending champions Harlequins by 30-10 to reach their fourth consecutive final of Premier 15s.

Poppy Cleall scored twice in the first half, while Marlie Packer also made it as the hosts asserted control.

Jess Breach trimmed the deficit at intermission, but May Campbell increased Sarries' lead shortly after the break.

Sarries lost in last year's final at Gloucester to Quins, who won their first title. But they were victorious in the heat in north London.

Both sides had a rough start to the game, with both teams struggling to get their nerves under control. Cleall eventually got up from the bottom of the ruck and ran over for the first try.

Packer showed her strength by spinning put the first tackle and smashing her way over the line. Sarries then blew Quins away with her two tries in just four minutes.

Alev Kelter's penalty pushed them further ahead, before Quins rallied to hit back through Breach in corner.

Cleall was the Player of the Match and restored Saracens' advantage by a strong surge close towards the line. The game seemed to be out of reach at halftime with the score at 22-5.

Campbell added a fourth attempt five minutes into the second period from a rolling maul right off the training ground. Cokayne's late attempt saved little more than pride for visitors.