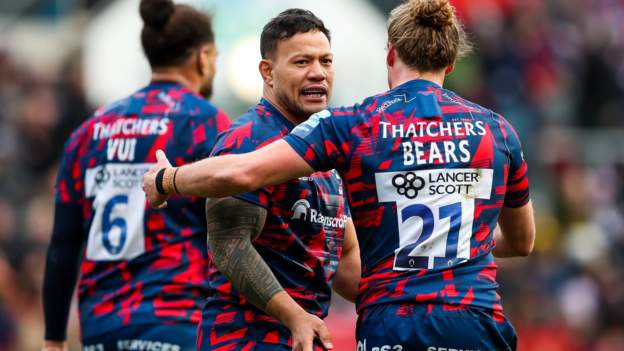 As they seek their fifth consecutive win against the London Irish, Steven Luatua is in charge of Bristol.

The blindside flanker Luatua, a Luatua-based blindsider, is paired up with Sam Jeffries, while Yann Thoms and Harry Thacker make up the front row.

Henry Arundell, 19, a full-back, makes his Premiership debut for London Irish. This is one of four changes in the team.

Agustin Creevy is in the front row. Sean O'Brien is at number eight, and Terrence Hepetema is at the centre.

Eighth-placed Irish sit in eighth place above Bristol in Premiership Table, but have not beaten Bears on the Road since November 2008.

Bristol have won their two previous league matches, and are unbeaten for four in all competitions. They also won a bonus try-scoring point in each.

Ioan Lloyd, the fly-half, is back after a positive Covid-19 testing. Alapati Leiua (winger in their recent win over Newcastle) also returns to the home team's starting XV.

After being cited for reckless or dangerous behavior in their defeat by Gloucester, Ollie Hoskins, London Irish prop, is now free to play. Hoskins admitted foul play and was given a yellow card.

“They're doing a great job in key areas. Although it's not perfect, we're playing excellent rugby. We are problem solving when we don’t get some things right and managing the game accordingly.

“It could be much easier on ourselves if there are some small things right, but that's what we're striving to do.

“They [London Irish]Gloucester was put under pressure and may not have made the most of the opportunity, but it's always a difficult game every time we play them.

They'll continue to play right up until the end. They also score lots of points in the last quarter. Phipps & Jackson are important players for them. They play week-in and week-out so we expect a very tough game.

“There was frustration and disappointment that some of the details we had worked on at Gloucester didn't come together last week.

“It's going be a different kind of game from last weeks, there will be two groups who want to back each other's skill-set.

“If you see it in cold light, we're facing a team who finished in the top two last year and seem to have regained their mojo.”

“We are expecting a very dynamic and open game. This time, I expect nothing less. We're two of the most exciting attacks at the competition on our day.”