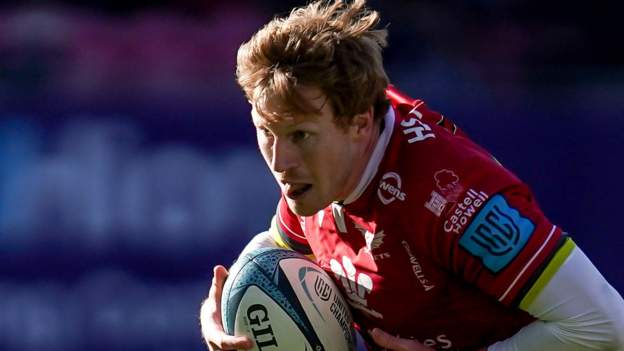 Rhys Patchell, Scarlets flyhalf, has given Wayne Pivac, Wales coach, an injury scare after limping against Stormers with a Hamstring injury.

Patchell, 29 years old, was brought on to replace Patchell in the second half of the 26-21 United Rugby Championship loss, but soon got out of breath after taking a break.

Pivac has called him back for the three-Test South Africa tour in July.

Dwayne Peat, Scarlets coach, stated that Patchell's injuries were not in his control.

Patchell, along with captain Dan Biggar (fly-halves) and Gareth Anscombe (fly-halves), was chosen to face off against the Springboks.

After a long-term concussion issue, he has had a disappointing season. He also suffered from leg injuries.

Johnny Williams, Scarlets' centre, was also included in the 33-man Wales squad. He left the field for a head injury assessment but also seemed to have suffered a hand injury during the second half. Peel described Williams as “fine.”

Scarlets just failed to overhaul OspreysFinish as the leader of the Welsh regions, win the Welsh Shield, and be qualified for the Champions Cup.

Peel said, “It was an enormous effort.”

“We filled the tank. Everyone who has seen the Stormers in action this season knows that they are energetic, high-powered, and possess a lot of physicality.

“We went toe, toe with that. It's a proud moment for me.

“The game was all about fine margins and any side could have won it.

“That's what you can expect. It's not about scoring points, it's about participating in those battles.

“Sometimes, you win, sometimes you lose. For us, consistency is crucial.

“If they can win those battles against the top sides, they will be finishing second in league. It's huge.

“I'm happy with some of the younger guys. Jac Price was a great second row player.

“We had a young front-row against Kitshoff and Malherbe, who are Springboks World Cup champions. This was the Carmarthen Quins front row of a few decades ago.

In Peel's first season, Scarlets placed 10th in the 16 team league. The former Wales scrum-half is hoping for improvement in next year.

Peel stated, “I believe there's tremendous growth, but it's about how we respond, these guys had a taste,”

“This is the highest level. Yes, we can compete but we must compete consistently.

“We haven’t done this this year, is the truth. I think we’ve been up-and-down.”