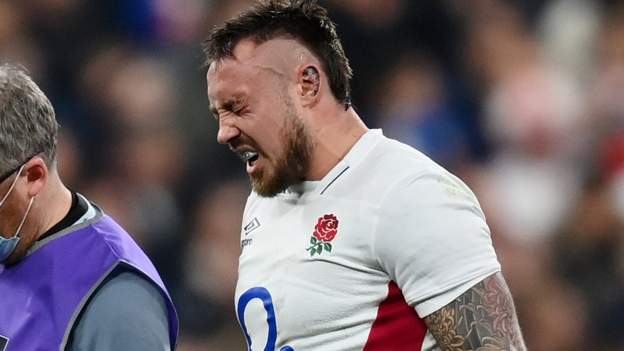 Rob Baxter, Exeter manager, said that their poor Premiership season was due to the injury of many of his top stars.

The Chiefs are currently sixth in the Premiership, and could be eliminated from the play-offs for first time since 2016.

Only a few league games have been played by British and Irish Lions players like Sam Simmonds and Luke Cowan-Dickie.

Baxter stated, “We faced many challenges in half the season.”

“We had an amazing injury list. We had players out for all kinds reasons.

He said that it was fascinating to look at the stats yesterday. “We've had a lot players that haven’t played double-figures games for us, as well as influential players,” he stated to BBC Radio Devon.

After going on the Lions tour of South Africa last summer with the Lions, Simmonds, Cowan–Dickie, and Hill missed the first three weeks, all are out with injuries.

Back-up players like Jacques Vermeulen or Will Witty have also been absent for significant periods due to injury.

Since 2016, Exeter has finished in the top flight first or second every season. However, they know that they must defeat Harlequins and Bristol in their final two matches. They also need to win against Northampton and Gloucester if they want to return to Twickenham for a seventh consecutive season.

Baxter added, “There's quite the story to the season around these kind of things, however, at the same we were in games that we lost just a few points throughout the course of the season. And we only need to have a handful of them to go in, and it's an entirely different tale.”

“We are right where we are. That's our fault. Now, we just have to make the most out of it.”