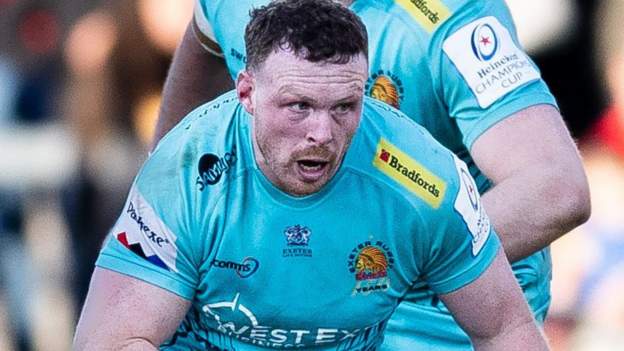 Sam Simmonds won't be able to go on the England tour of Australia in July because he has a hip problem.

He has not been in action since the Chiefs’ Heineken Champions Cup last-16, first-leg win over Munster 9 April.

Rob Baxter, Exeter director for rugby, said that “it's been an niggly injury to his hip that's been making him feel pain.”

“The only thing that has restricted me was my pain, not my function.”

“If he can get this sorted now, that means he can have good recovery time, and a strong pre-season. This is a huge year if he's got international ambitions next Year, it being a World Cup.

“It will help him reach the same level that he reached a few years ago, when he used to bang tries from every direction.

“He'll be determined to keep that up because that's what brought him his international and Lions recognition.”

Hill has been out since January because of a stress fracture. Cowan Dikie has not played since. limping off against Wales with a knee ligament injuryIn February Nowell broke his armThree weeks later, France was up against us.

Exeter has no players in the England squad to face the BarbariansBaxter thinks that Nowell, Hill and Cowan–Dickie will be fit for England’s visit to Australia next month.

He stated, “They'll come in with England for some rehabilitation so England can have an early look at them next week.”

“They're making good progress at the moment and there's no reason not to continue that trend.

“The tour is still some way off. The final round of Premiership will not take place for another few weeks. After that, you have a semi-final as well as a final before the tour begins.

“It's still more than a month away, so they still have a decent amount rehab time before making those decisions.”