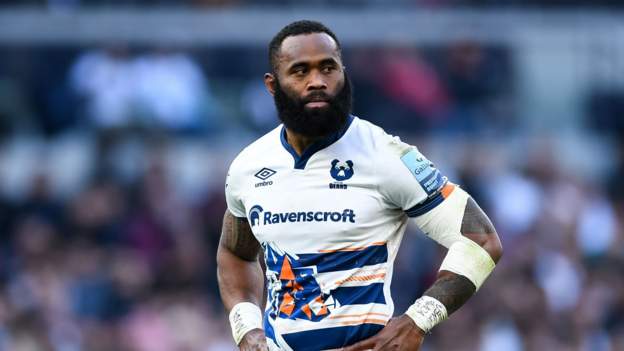 Semi Radradra from Bristol has been ruled ineligible for the remainder of the season. She is due to undergo a second surgery on her knee this week.

Radradra, 29 years old, missed the first four months due to a knee injury that he suffered while playing for Fiji Sevens in the Tokyo Olympics.

He underwent surgery on October 31 and was able to return to play in December.

Pat Lam, Bristol's director of rugby, confirmed that Radradra will have the surgery on his other knee.

Radradra was featured in Bristol's two most recent matches in the European Champions Cup, where they were knocked out by Sale. He was awarded a try in the first leg. Bristol won it narrowly.

“Unfortunately Semi is having knee surgery this Week, so that's the end of the season for him. This gives him a chance to recover, recoup, and be ready to start the next season. Lam stated that this will be a positive thing for him.

It will all be cleaned up, and he'll be ready for next season.

This season, Radradra played 12 matches for Bristol in the Premiership. With four matches remaining in this campaign, they are currently ranked 10th in the league.

Next up, Bristol will face West Country rivals Gloucester on Friday 22 April.

This weekend's Bears game will be without England prop Kyle Sinckler, who has not played for the team since the Six Nations Six Nations. Charles Piutau, full-back, is also out with injury. Siva Naulago, winger after a knee operation is also unavailable.

Lam stated that Kyle had been having a problem since the Six Nations and that he would like to take some time now to fix it. England and the medical team will be closely involved with this one.

“Charles [Piutau]Unfortunately, he was not able to train Monday and had a slight groin strain. He's now out of the program for this week.

Lam also stated that Rich Lane, a full-back for Bristol, had to leave the club due to injury. He joined Bristol in February on loan from Bedford Championship side.

Lane, age 28, was a part of the Sale defeat but later it was discovered that he had broken his foot.

Lam stated that Arron Reed got “strung on” seven minutes into the game. “I believe Arron Reed stepped left, and he landed on Rich's foot and broke his third bone.

“But what a trooper! He went right to half-time. They poked their noses in and I believe he made a try saving tackle. We thought it was just some bruising to his foot.

“We knew he was only doing forty.” [minutes]Charles was doing the second forty, but he was very efficient. When we saw the scans that it was a clean break, it was clear that Charles was struggling.

“That tells a lot about him in terms of his character.”