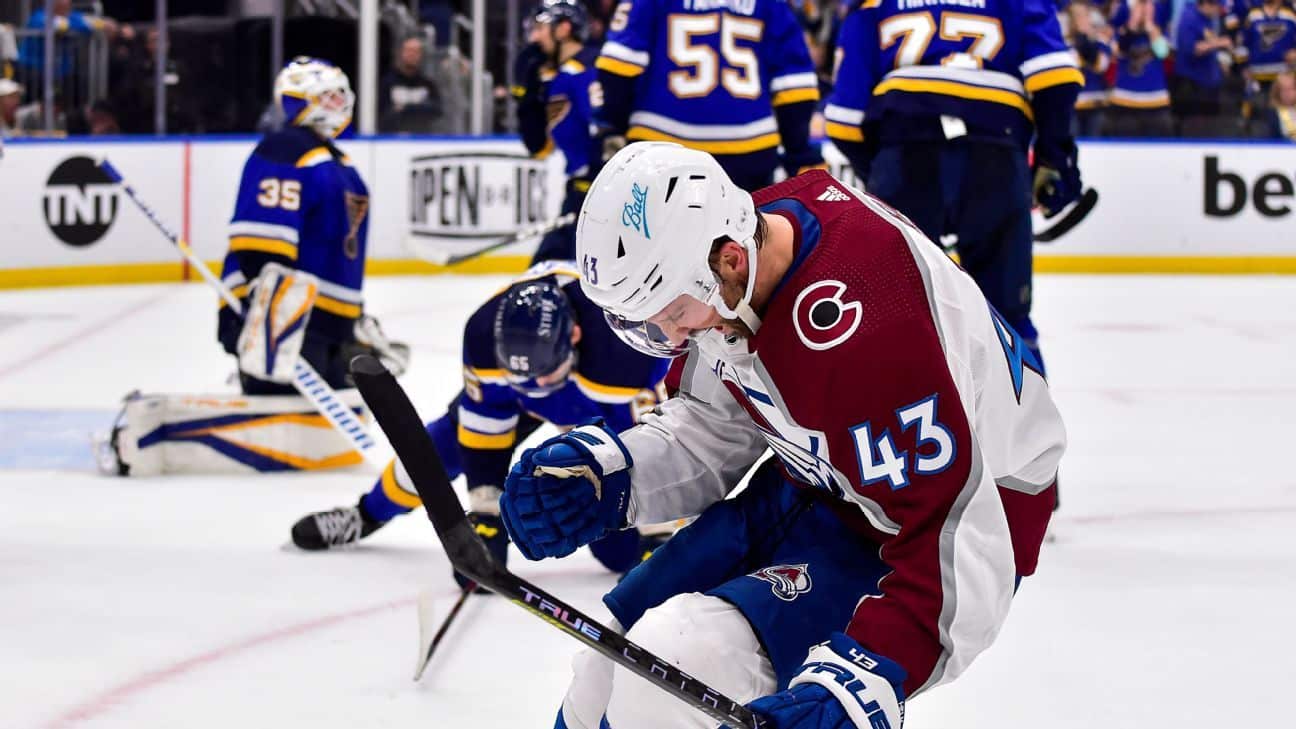 ST. LOUIS Darren HelmWith 5.6 seconds remaining in the third period,'s goal gave the opportunity to the Colorado Avalanche To eliminate the opponent, a win of 3-2 is required Blues Friday night, Game 6 in St. Louis

Helm, a 35 year-old fourth-liner, won his first playoffs game on a thrilling win that beat the Blues goalie Ville Husso (36 saves). It seemed that overtime was inevitable. Helm's goal led to celebration on the Avalanche bench and stunned silence from the Enterprise Center crowd.

Game 6 was a game in which the Avalanche dominated play, and the Blues effectively counterpunched.

The Avalanche won the 5-on-5 match in the first half. Husso was the key stopper. Mikko Rantanen Gabriel Landeskog. The Blues won the game with a one-goal lead. Defenseman Niko Mikkola At the point, the puck was in the Avalanche's zone. It was then transferred to Robert Thomas. Blues center, who scored in Game 5 to get his first two points in the series, also found defenseman Justin Faulk The zone is open. Faulk took a shot above the goalie Darcy KuemperWith less than a minute remaining in the first period, he was on his shoulder to give the lead of 1-0.

The Blues started the second period with uninspired and sloppy play. The Avalanche paid them. Forward J.T. Compher Follow up Josh Manson At 5:19 in the second period, Compher tucked the puck past Husso and placed it on the doorstep of Husso's crease. Compher was the first to do so in the postseason.

St. Louis gained the lead due to a mistake by a Colorado defenseman Jack JohnsonAfter sustaining a season-ending injury, defenseman, he was unable to play and entered the series in Game 4. Samuel Girard. Johnson attempted to keep St. Louis' puck at their blueline but failed to do so. Brayden Schenn Blues to start a 2-on-1. Schenn was able to find a winger even though Manson was sliding to prevent the pass. Jordan Kyrou For this seventh postseason, 9:34

There were a few chances for the Blues to take the lead but they missed them, including an open net on Manson's power play that saw him save a goal and a breakaway opportunity for Kyrou. St. Louis was up 2-1 at the end of the second period.

Husso continued to play strong, but he was unable to defend in the third period. Colton Parayko The Blues, who had a tense game filled with gaffes, put the puck in the crowd at 8:19 for a delay-of-game penalty. The Blues worked hard to end the Avalanche powerplay but Compher scored his second goal past Husso, tying the game at 10:18.

Helm became the hero and sent Avalanche to conference finals.