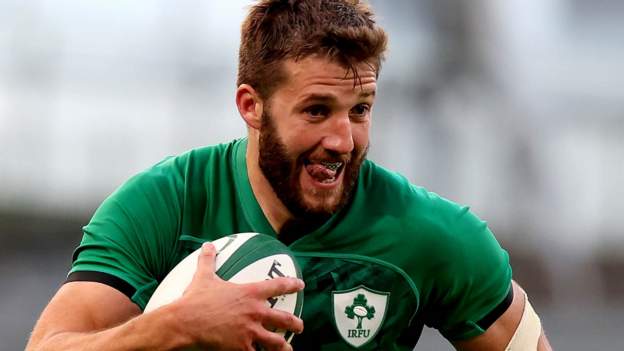 Stuart McCloskey, Ulster centre for Ireland, has stated that he is determined and eager to increase his six Ireland caps after making his debut in 2016.

The injury that ruled him out of this year’s Six Nations squad meant that he was not available, but he is back and ready to impress Andy Farrell.

He told The Ulster Rugby Show that he still believes he has a lot more to give.

“I will still be fighting over those two to three years that I believe I've left of really good rugby, and maybe I'll get back to the World Cup.”

He stated that he had just returned from Connacht and was not 100%. This would be the first week that I am fully, fully fit. I'm hoping to play well against the Dragons this Sunday and hopefully get back in the saddle with any luck.

Quality is in the details

McCloskey is acutely aware of the fierce competition for positions in the Irish line up, particularly at the centre.

“I wouldn't lie to you if i said that I didn’t think I should play a little more. It's hard to complain when they are playing the way that they are at the moment.

“The results are good and Andy's got them playing great rugby – they were very unlucky against France at the weekend.

“The guys who are there, are world class. Robbie (Henshaw), Bundee (Aki), and Robbie (Henshaw), both started with the Lions, while I thought it was a bit funny that Garry Ringrose wasn't on this Lions tour. You've got three centres that are among the best in the world.

“Have my skills been at this level?” “I would argue that I have played at that level at some time in my career. Although I would have liked to have had a break, maybe a few games in a row, it was not possible. That's how it is sometimes.

“I've been in nearly every squad over the last two to three-and-a half years and Andy has been great with me. He was a great mentor and I felt that I had improved a lot. He reached out to me before the Six Nations squad was selected to tell me that it was because of the injury.

McCloskey helped Ulster climb to the top of United Rugby Championship table. They are now through to the Champions Cup last 16 where they will take on Toulouse, the current champions.

Ulster's last league victory was in 2006. Their only European triumph came seven year earlier. McCloskey believes silverware may be on its way to Kingspan Stadium.

“We have brilliant young talent. We're at the top in the league and are well into the last 16 of Europe. You are almost there if we beat Toulouse.

“I believe it's just getting over Leinster in league. It's been in the top three to four every year. Now it's getting past that hump. They were defeated in December, and I believe we can beat them today.

“We demonstrated that in the Champions Cup quarterfinals a few year back at Aviva Stadium, where we should have won the result – unfortunately, a few things went against our team. We must bring our best game to beat them, they are what we aim to achieve at the moment.

“They are the best European team and have been for four to five years. We've been continuously competing for championships. It's not over yet, we're just trying to get over the next hurdle. This is the closest I've come in my time here.”

Stuart McCloskey's interview with The Ulster Rugby Show airs on Thursday, 22:00 GMT on BBC2 NI. You can also hear it on the iPlayer.