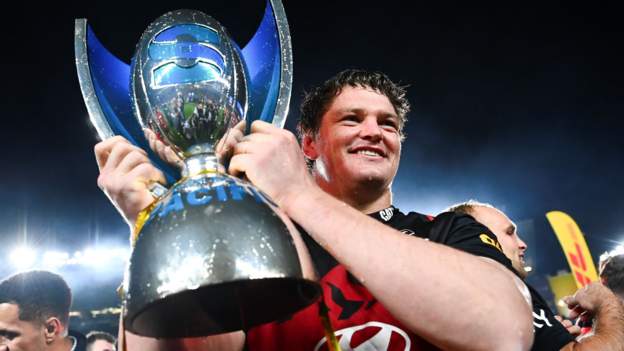 Blues were defeated 21-7 by Crusaders in the Super Rugby Pacific final at Eden Park, to win their 11th title.

The Christchurch-based Crusaders dominated the Auckland crowd during rainy conditions.

The Blues won 15 games consecutively before the final and finished the season at the top before the play offs.

Crusaders won the all-New Zealand contest by 13-0 at halftime. This was a dominating display that saw Mo'unga run the game and kick a penalty and drop-goal before Hall scored from close range.

Blues were able to score a goal in the second period, thanks to a try by Finlay Christie (scrum-half), converted by Stephen Perofeta.

With four minutes remaining, Pablo Matera, an Argentine flanker, broke through the Blues' defensive line following a mix up at the back. Reece was the fastest over the slick grass, picking up the ball, and moving over to secure victory.

Referring to his tight defensive display, Crusaders/All Blacks lock Sam Whitelock said that it wasn't always about scoring points. Sometimes, it was about stopping them scoring.

Beauden Barrett, Blues fly-half, admitted that his team was not good enough.

“It's really disappointing. It's a disappointing loss. We had a great season and wanted to be here to do a job tonight. Barrett said that it was difficult to swallow.

Crusaders are now the most successful side of the Pacific-region competition. They also won two domestic championships in Super Rugby Aotearoa when the regional version of the competition was suspended due to Covid's 2021 and 2020 seasons.