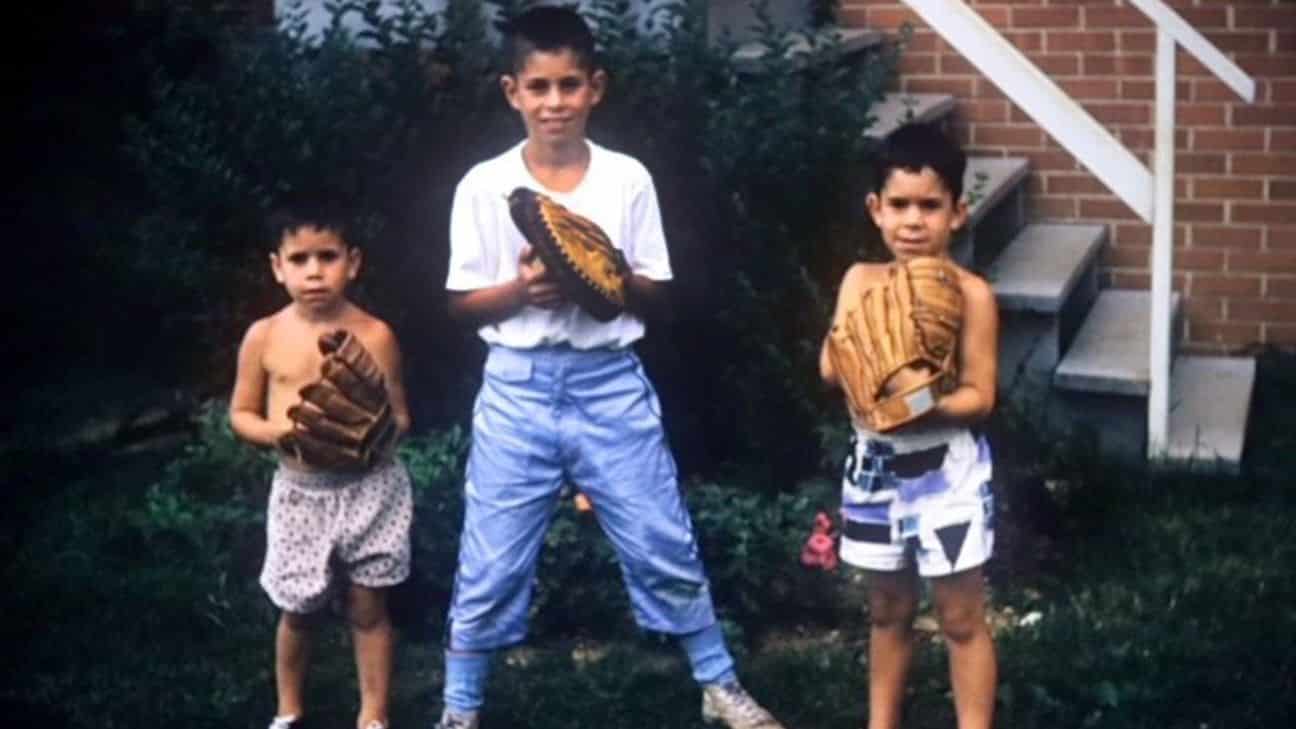 Matt, my older brother, is my best friend and strongest person I've ever met. We were both born 11 months apart in the same year and instantly became close friends. Because they couldn't imagine us apart, my parents sent me to kindergarten one year earlier than I was due. We shared some of the same school classes, played on the same teams and, since we were just five years old, had a mutual love for baseball. Lou Gehrig's story “The Pride of the Yankees” was one of our childhood favorites. That movie was a favorite of ours, and we watched it dozens of times.

The Baseball Writers Association of America nominated me for the Career Excellence Award on July 11, 2021. This was a proud moment for my family, as we all grew up playing baseball. My father, mother, and brothers are the only ones who felt more honored.

The greatest day in my professional career was quickly followed by the worst day of my entire life. Matt was diagnosed the next day with Lou Gehrig’s disease, ALS. I cannot even write or speak those words without crying. Our family is devastated. Matt is the glue that binds everyone together and the ringleader in our extended family.

Yet, when I feel like giving up, I look at my brother, 66, who fights this terrible disease every day with no complaints, no pity, and without tears. His speech is impaired, but his storytelling skills can still command attention. He has limited mobility, but he was able to mow his lawn until April. Although his dexterity has been affected, he was able to stand on a chair and repair a mangled curtain. His greatest asset is his positive attitude. It has been vital through this whole ordeal. Matt understands that I sometimes need to be strong. When I feel my pain Matt puts his hand on mine and says, “Timo, don’t worry about me.” I'm a happy person every day.

His happiest moments were always spent with his family or playing baseball. As a child, baseball was the main language in our household. Jeff, my dad, was an excellent player. His three sons learned to play and loved the game from him. Joy, my mom, was converted as she carried her sons from field to field.

Andy, my oldest brother, was a great player at Catholic University. He is a powerful-hitting catcher and has a strong throwing arm. In 1999, he was inducted into the school's Athletic Hall of Fame. Matt played four years at Catholic (1974-1978). Matt was a 5-foot-7 and 125-pound thirdbaseman. He could hit, run. take a walk. catch anything that came his direction. He was a major-league throwing arm and, despite his calm demeanor, would tear down anyone who tried to defeat him or his team. Val Vandeventer, CU center fielder, stated that if there were nine Matt Kurkjians in our team, we would win every game.

Matt's junior season, the 1977 CU team won ECAC Division I Championship. They beat St. John's and were within two games of reaching Omaha for the College World Series. The CU Hall of Fame has this team, and anyone who was around them will tell you how gutsy that group was.

CU's first and only fall game was held on October 1, just a few months after Matt's diagnosis. It was a doubleheader at Mount Saint Mary's. Ross Natoli has won over 750 games in his 37-year tenure as the head coach for the CU team. I called him last September to inquire if Matt could attend the game to throw out the ceremonial pitch. Although the ceremonial first pitch is not often thrown by a representative of the visiting team, Coach Natoli convinced Frank Leoni, Mount Saint Mary's coach to allow Matt to do it. He was particularly impressed with Matt's tremendous influence on the CU baseball program.

Natoli, who played in college against Matt and for six summers in Maryland Industrial League, says, “Matt, is the greatest teammate that I have ever had.” It is perhaps the most prestigious compliment in sports: to be great teammate.

Matt was confused when he heard that he had to throw the first ball. Matt's ALS has taken the strength and dexterity from his thumb and index fingers on each hand. It was a shock for someone who was born to throw baseballs that he had to learn how to throw one again. He was so excited, I started playing catch in his front yard with him (how many times have we done that as children?). Within a matter of minutes, he was throwing the ball like a pro.

Matt was pleasantly surprised to see Katherine, his son Michael and his daughter Lane, when we reached Mount Saint Mary's field. Kelly, my daughter was there, as well as Mike Toomey (a close family friend and ex-player, coach, and scout, one of the most talented baseball men I have ever seen). Matt asked “Why are these guys here?”

Matt was presented with a CU uniform by Coach Natoli just minutes before the start of the first pitch. Matt's name, along with the number that he wore to college were on the back of the jersey: M. Kurkjian 2. It was a very emotional moment. Matt was shocked, but he was deeply honored. He donned his jersey, walked up to the mound, and from the ground at the top of the mound, threw a fast pitch to Tyler Shaffer, senior catcher. He was a typical Matt and refused to give up on the baseball diamond.

Then came the moment I have been covering baseball for 44 years: Matt looked to his left and saw that his family was wearing identical CU jerseys, with M. Kurkjian 2, written on the back. He then looked to his right. All 47 players The Catholic University team was pictured with M. Kurkjian, who was wearing CU jerseys. This is a beautiful tribute. Matt broke down, it was the first time that I had ever seen him cry since his ALS diagnosis. As he wept, he hugged his family. He hugged Natoli. He said, “This is the greatest thing ever.” “I cannot believe they did that for me.”

Matt's days at CU were some of the best days of his entire life.

Now he was staring at each CU player wearing a jersey that had his name and number printed on it. CU won both doubleheader games wearing the same jersey. That's the way baseball works.

Before today's game, @CatholicU_BSB The 1977 Cardinals were the first team to qualify for the NCAA Division I tournament. Matt Kurkjian (third baseman) threw the first pitch.#ThisIsCatholicU #d3baseball pic.twitter.com/XVYRl2WVig

Then Coach Natoli did it again, this time on April 2. He ordered Matt to throw the ball at the doubleheader at CU against Juniata College. This was another athletic strike that went to Coach Natoli. This time, Matt was surrounded by many of the 1977 champion team players. It was almost as uplifting and inspiring as the October first ball ceremony, because Matt was surrounded this time by his teammates, his sons, CU's most decorated squad.

Baseball is a beautiful game. It celebrates the great moments. It recognizes its players. It ensures that they know how much people care. This is exactly what CU baseball has done for my family over 50 years.

Matt's diagnosis was kept quiet by his family for many months. He did not want anyone to feel sorry for him or sad about him. My son Jeff, a country radio host and a singer, spoke to me at an ALS fundraiser in Las Vegas in February. The father of Oakland Athletics outfielder Stephen Piscotty was calling me that day. Mike Piscotty's wife Gretchin died from ALS in 2019. Mike Crawford, the father to Brandon Crawford of the San Francisco Giants, called me. Crawford has been friends with the Piscotties for many years and joined their fight. Two of the many baseball families that are trying to spread awareness and find a cure for this terrible illness are these two.

Teresa Thurtle (Therapy Development Institute) ambassador met me at the fundraiser. She also offered any assistance she could to my family. She lost her grandfather and father to ALS. Both were 49.

She told me that this is the worst disease she could be a part. It is the most supportive system you can be a part.

Matt and I have received many offers of help since Drew Robinson's diagnosis. Drew was a former minor league outfielder who will be retiring in 2020. survived a suicide attemptHe now assists others with mental health, illness, and tragedy. I had the opportunity to speak with Tom Haberstroh, a basketball writer whose mom Patty has ALS. Tom played an important role in making Lou Gehrig's Day an annual event for Major League Baseball. Chris Snow, an ALS patient, is now an executive with the Calgary Flames. He told my brother, “Whatever you need, dial me anytime.” Jon Sciambi, Chicago Cubs/ESPN broadcaster, is someone I often hear from. Project Main St.ALS patients can support them by donating to. Jon lost Tim Sheehy to ALS in 2007.

My brother and best friend will die from ALS one day. Our lives, as well as ours, will be forever changed. July 12, 2021 changed everything.

The best teammate I have ever had.

Matt, my brother and best friend.