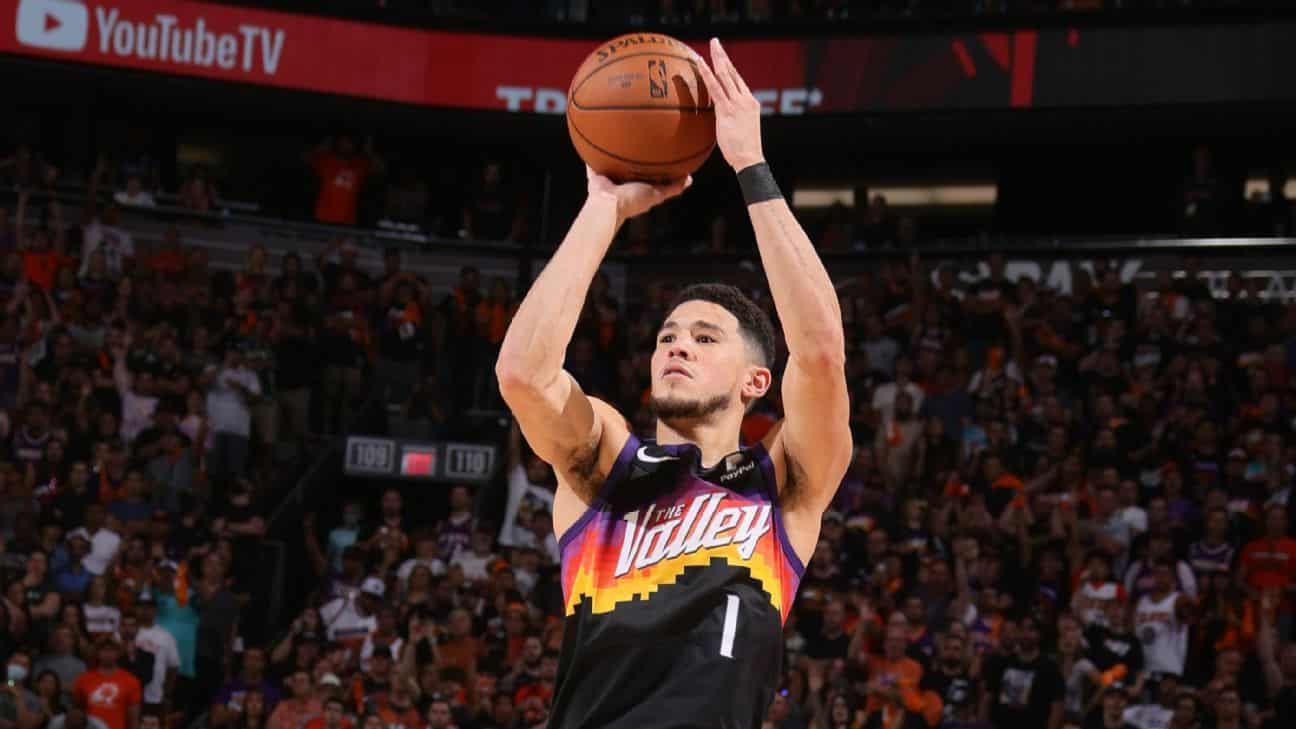 PHOENIX — With the Milwaukee Bucks breathing down the Phoenix Suns‘ necks on Thursday, threatening to erase a once 15-point lead and head back home with a series split, the Suns relied on the guy who ticks off Chris Paul when he doesn't do precisely what he did in the fourth quarter of Game 2 of the NBA Finals.

Shoot. And shoot some more.

Devin Booker scored nine of his team-high 31 points in the final frame, hitting a trio of timely triples to stave off the Bucks' comeback attempt. The Suns had a historic night as a team from beyond the arc in the 118-108 win.

“Those are the moments that he lives for,” Phoenix coach Monty Williams said of Booker. “Doesn't run from it. … He just steps up and makes big plays.”

The Bucks started the fourth quarter on a 6-2 spurt to cut the Suns' lead to six when Booker, with the 7-foot Brook Lopez flailing a hand in his face, sunk a sidestep 3 to push the lead back to nine with 9:41 remaining.

A couple minutes later, after Milwaukee had pulled within seven, he hit back-to-back 3s in the span of 31 seconds to balloon the lead up to 13, sending the crowd into a frenzy.

And it led to the Bucks staring down a 2-0 series hole.

“Every time Book hit a 3 or did something, you could just tell it just melted them down,” Suns guard Mikal Bridges, who scored 27, said of Milwaukee. “[They were thinking] like, ‘Dang, we was right there.'”

It was Booker's eighth game with 30-plus points in these playoffs out of the 18 games Phoenix has played on its way to the championship round. His 490 total points this postseason rank third all time for a player competing in his first playoffs, according to ESPN Stats & Information research, trailing only Rick Barry (521) and Julius Erving (518).

“The thing about Devin, he shoots the same way first quarter, fourth quarter, doesn't matter, his shot looks the same,” Williams said. “That's a guy that's put a ton of work in his shot, but the mentality, he's calm in those moments. So, we're grateful for those contributions in those moments.”

Paul, who complemented Booker's offensive outburst with 23 points and eight assists of his own, was a little more pointed with the bar he has set for his 24-year-old teammate.

Booker finished 7-of-12 from 3 on a night his team went 20-for-40, tying the record for second-most 3s ever made in a Finals game.

“I mean, the guys work on it,” Williams said of his group's output. “We have a let-it-fly mentality.”

Booker hit 10 of his final 15 attempts after starting 2-for-10, getting sharper as the game went on. He became the sixth player in Finals history to finish with 30 points, five rebounds, five assists and five 3s — joining Stephen Curry (who did it four times), Kevin Durant (twice), LeBron James, Draymond Green and Rashard Lewis.

But while teammates marveled at his play — “He's not going to run from any fight, battle, situation that the basketball court presents,” Jae Crowder said — Booker gave the credit right back to those with whom he shares the court.

“That's just team,” Booker said. “Team basketball. I think a few of [the shots] were open, and we prepared for these moments.”

For Paul, who is within reach of the title he has been chasing for 16 years, he said he has appreciated pairing with Booker in that pursuit.

“He just stays in attack mode all game long,” Paul said. “And that's what I love about him.”