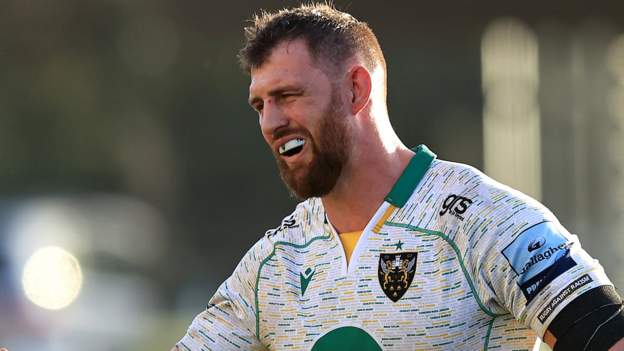 Northampton's ex-england back-row Tom Wood will step down from rugby after the season.

He won the European Challenge Cup in 2014 with Saints and was part the side that won the Premiership. 2011 European Champions Cup final.

Since February, when he sustained a shoulder injury, the 2011 Premiership Player-of-the-Season has not played.

Wood stated that Northampton Saints was a huge part of his life, and he's made many very special memories there.

“I feel honored to have been able pull on the jersey here over the past 12 seasons with some amazing players.

“Obviously, it is difficult and an emotional decision for any player to retire. Injury has prevented me from making as much contribution to the pitch this season, but that's part of professional sports.

“I'm proud of my playing career, with England and Saints. I want to thank everyone who supported me while here.”

Stuart Lancaster, former England head coach, said that it was an honor to have coached Tom during a significant part of his international career.

He was uncompromising, tough, and skilled and held himself to the highest standards. I remember his captaincy on the 2013 Argentina tour. He was an exceptional leader and mentor, helping young athletes reach their full potential.

“His success as a player shows his professionalism and dedication. I believe that with all the qualities he possesses, he will be successful in whatever career he chooses.”

Chris Boyd, Northampton's director of rugby, said: “You cannot overstate his contribution on the field. If you look at his entire career at Northampton, there aren’t many people who’ve done more for that jersey in the club’s history.

“Emotionally connected people are vital in any organization, elite or otherwise.

“Woody's such a guy. He's an amazing competitor and the ultimate teamman, and everyone at Franklin's Gardens wished him the very best for retirement.”