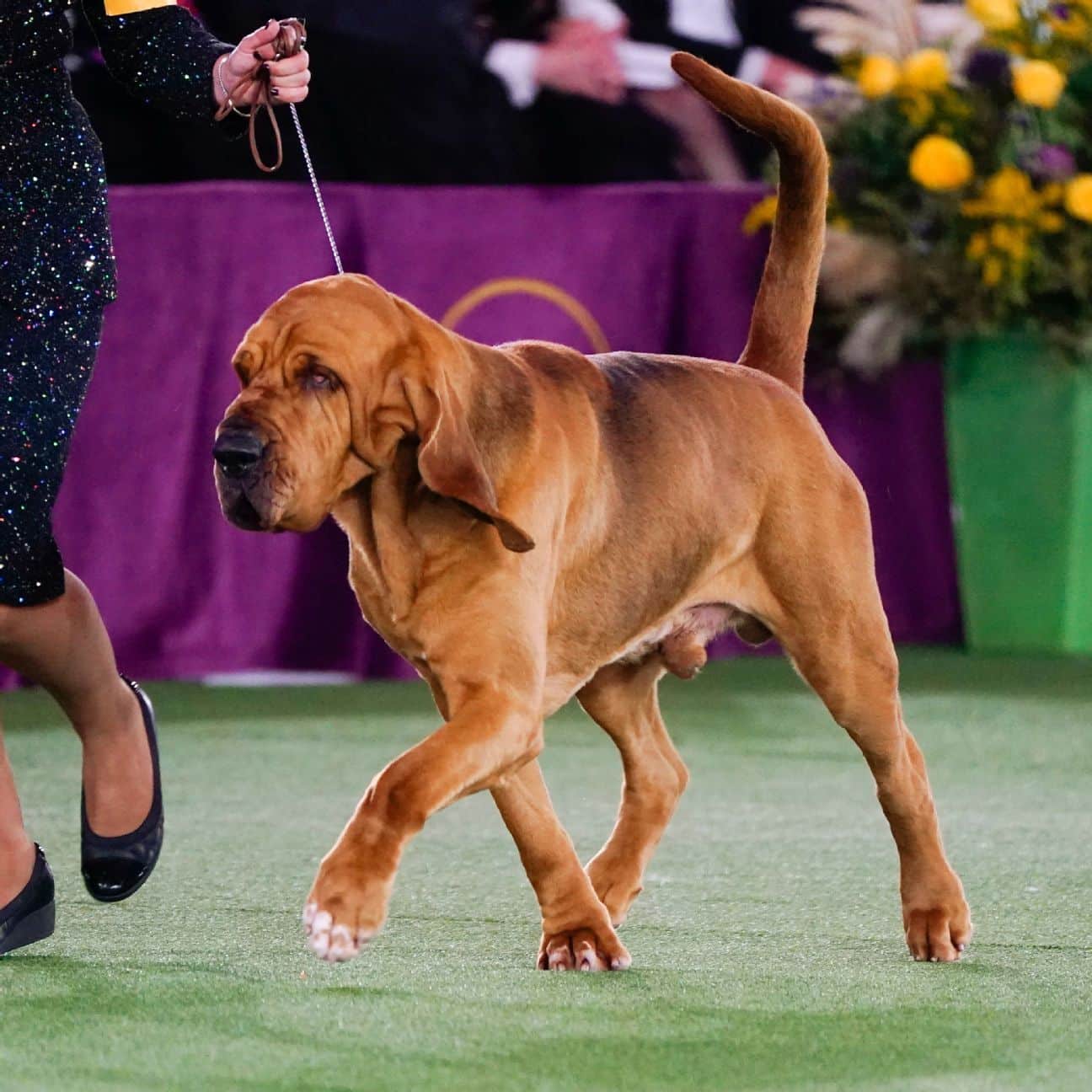 TARRYTOWN N.Y. — This hound has a lot to shout about.

Trumpet, a Bloodhound named Trumpet was awarded the Westminster Kennel Club Dog Show's Best in Show prize. It is the first time this breed has won U.S. dogdom’s most coveted show prize.

Trumpet won the trophy by winning the final ring with a powerful, poised stride. He beat a French bulldog and a German shepherd, as well as a Maltese, a Maltese and an English setter.

Heather Helmer, handler, cobreeder, and co-owner (who also goes under Heather Buehner), said that she was shocked by the stiff competition. “Sometimes the bloodhound feels a little like an underdog.”

Trumpet is a dog-show veteran. Do you feel that he has a special sense of who he really is?

“I believe he does,” said his Berlin Center, Ohio-based handler.

Trumpet, after his victory, posed patiently for photos and then started to do what bloodhounds love best: sniff around. He looked through some ornamental flowers, but didn't seem to find anything.

Winston, a French bulldog owned by an NFL defensive lineman Morgan FoxFinished second at the nation's most prestigious show for dogs.

Fox sent a text message to Fox afterward, saying that he was proud of Fox and his team.

Fox, who was signed by the Los Angeles Chargers and has been playing for the Los Angeles Rams And the Carolina PanthersWinston was a gift from Sandy Fox, his grandmother. She has been breeding and showing Frenchies for many decades.

Fox was raised with one dog and says that he saw Winston grow up and knew that he was a great dog in appearance and character. He was the nation's top-ranked dog and he entered Westminster.

Fox stated by telephone that Fox is a joy and a joy, before Winston gave him his award. “He walks around with the most infectious smile a dog could have.

Striker, a Samoyed who also reached the finals last season, was also among the seven finalists. River, a big-winning German shepherd, MM, the Lakeland terrier, Belle, the English setter, and a Maltese clearly aimed for stardom: Her name, Hollywood.

Striker was ranked first in canine ranking last year and has been participating in a few dog shows recently, his handler Laura King stated.

“His charisma is evident when he's doing so,” she stated. He vocally complains when his charm is lacking.

Although he was calm in the ring a Alaskan Malamute made a noise to accompany the Samoyeds and other working breeds during the semifinal round.

More than 3,000 purebred dogs participated in the competition, which included Yorkshire terriers and Affenpinschers. The aim is to find the best dog for the breed.

The show is usually held in winter at New York City’s Madison Square Garden. However, it moved to suburban Lyndhurst last year due to the coronavirus pandemic.

For some dogs, like golden retrievers who had to compete against dozens of other dogs just to win their breed, they were able to advance to the semifinals. Some were rare breeds, while others were not represented.

Ooma was Ooma the only Chinook who showed up. While the official dog for New Hampshire is the sled-puller, they are very rare throughout the country.

Patti Richards from West Haven, Vermont said that Ooma's owner, breeder, and handler, Ooma, would love to see “a few more” in Westminster's ring. “We are in danger of losing our breed if there aren't people who will show and breed.”

Even though the hopefuls didn’t take home a ribbon at the event, they were able to show off their dogs and what they can accomplish.

Bonnie the Brittany is Dr. Jessica Sielawa’s very first show dog. The teamwork they have extends far beyond the ring.

She hopes to get her showdog certified as a therapy animal.