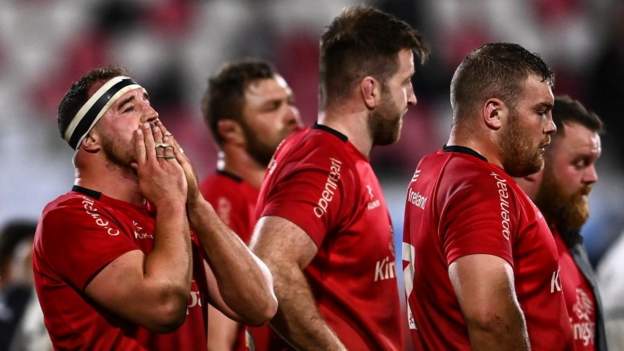 Dan McFarland claims that Ulster's defeat by Toulouse by one point aggregate was not due to Tom O'Toole's redcard, but rather a series of crucial moments.

With 15 minutes left in the second leg, Prop O'Toole was disqualified. Ulster led the tie by three.

McFarland stated that “Ultimately, the game is decided because of a few critical things that were wrong.”

“Teams do it naturally. But if you want win at this level against sides as good as Toulouse, you can't afford those mistakes.

“It happens but it just happens on the day we didn’t quite get it right.”

Ulster brought home a 26-20 lead after securing a memorable victory in Toulouse, where the French champions were reduced to just 14 men in the 10th.

This lead was erased in Belfast at the half-hour mark. Two tries were scored by the visitors in quick succession. The first came from Thomas Ramos, after Romain Namack pounded through Ulster's defence. The fly-half ran the length and score for an intercept five minutes later.

“I think they gave us two chances by looking at their two attempts.” McFarland reflected that they were able to pass them on the inside shoulder, and then intercepted in five minutes.

“There was another crucial call on James Hume, who was at his breaking point and that was to my mind not a penalty. Another crucial moment.

“You can see how their half-backs play and the quality of their play. Dupont kicks the ball 45m from his own line, from literally under his posts.

We were putting pressure on them and he does it often. It's next level, and that's what you should expect from the greatest player in the world.”

O'Toole was sent to the stands for a high hit against Anthony Jelonch. Ulster then extended their lead with a John Cooney penalty. Toulouse continued their climb up the field, waiting for space that would allow Dupont in. The visitors won the match 30-23 and tied the game 50-49 on aggregare.

McFarland accepted McFarland's view that “their attempt at the end obviously resulted from having an extra man, being so potent and being able to stretch out the field like they do.”

“You could choose any moment from these games. Because we had to give up our inside shoulder for defence, we gave away a try. It's not worth the effort if that happens.

“Last week, if the tackle zone had been a bit clearer. [referee]Wayne Barnes may have given us a jackal penalty, which would have put us 13 points ahead going into the leg.

There are many instances. In the lead up to our try, there was likely a forward pass. There were many things we could have done better in the past two weeks, but it was what it was.

“We could've won it if our focus was a little sharper in some areas that I expect us to be sharper.

“We didn’t get it quite right, but the margins against a team such as Toulouse are so small, you’re living on edge the entire time and they’re going to punish any wrongdoing.”