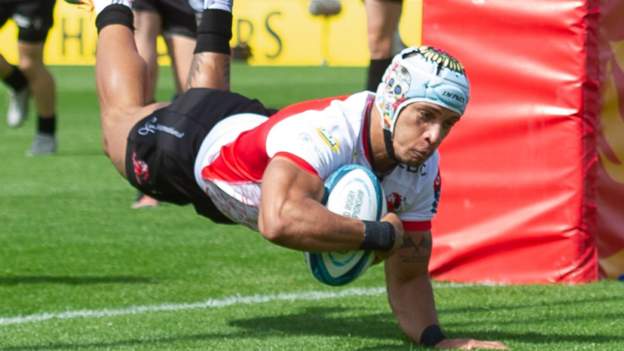 Dragons' attempts to secure the home United Rugby Championship win at the end of the season fell flat as they were defeated 21-11 by Lions.

The Welsh region won a well-deserved lead when Rio Dyer beat Jordan Hendrikse's footwork for a score in corner.

It was only one-way traffic, with Ruan Venter and Ruan Dreyer crossing the line to win for Lions.

The game began in a lively manner, with Dragons gaining the majority of possession. Dyer was close to scoring, but Quan Horn's cover tackle forced the Dragons to touch.

After South Africa's defensive line-out was a disaster, the Dragons were awarded a pass away from a try. However, Stean Pienaar, a Lions wing, jumped up to intercept.

The Lions wing was left with no cover and the pitch was long. However, he couldn't run fast enough to avoid the back-tracking Jared Rosser.

The lead was not to last as Lions struck back with their own try through Van der Merwe. He received a nice inside pass from Hendrikse who also converted the conversion to make it 7-5.

Three minutes later, the Welsh region took a lead and Reed kicked a penalty. The ball had been ruled to have been deliberately hit by Lions.

After the Lions defenders failed to roll away at the breakdown, a second Reed penalty was added on the stroke of halftime. This increased the Dragons' lead by four points.

The Lions began the second half stronger and scored their second attempt five minutes later.

After Morne van der Berg had broken a tackle to get into Dragons territory the Lions forwards pushed their way closer to the defense, which was finally unlocked by Venter's brilliant pass to Van der Berg, who crossed the posts.

The South Africans extended their lead at 52 minutes when Dreyer, a veteran prop and after more excellent work from his pack, forced his way across from a metre off the line.

Dragons thought that they could get back in the contest when Josh Lewis intercepted Hendrikse’s pass. He raced towards the try line but Horn's last ditch tackle forced a knock on.

The Dragons' disappointing campaign ended with this loss. They managed one draw at Rodney Parade, and no wins.

The Welsh region finishes the inaugural URC campaign 15th, one place above Zebre from Italy who support the table.

They finished third in the URC standings, a lot behind the three South African sides that won Victory for Lions.