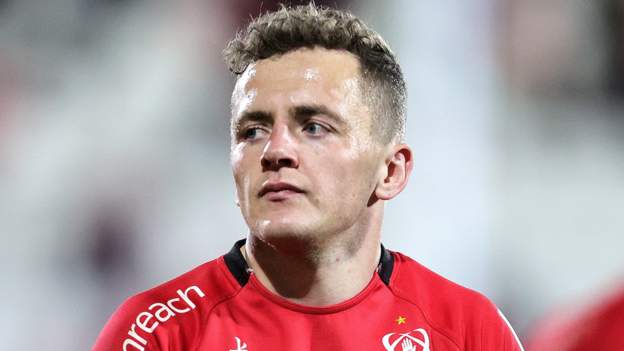 Lowry is now at full-back, with Stewart Moore arriving at 15.

Munster have named a strong team, with Joey Carbery beginning after starring in last week’s victory over Exeter.

Peter O'Mahony suffered a knock against Chiefs, so Jack O'Donoghue will take over as captain.

Ulster makes two changes to their back row: Matty Rea replaces his brother Marcus as blindside flanker, while Nick Timoney is moved to number eight in order to accommodate Jordi Murphy at openside.

Moore arrives in the side having impressed at fullback in Ulster’s win over Cardiff in February. Lowry took the reins at fly half with Burns after a concussion in the latter stages of the team's season. Toulouse defeat.

Lowry played fly half throughout his distinguished school rugby career. However, the vast majority his senior caps have been at fullback including this year's Six Nations match against Italy.

Burns is also out of commission after Kieran Treadwell suffered a concussion. Sam Carter takes his place.

Johan van Graan is the Munster coach and has made seven adjustments to his side. successfully overturned a first-leg deficitBook their place in the top eight with a win at Thomond Park

Simon Zebo sustained a minor injury during the win. Shane Daly is now on the left side, while Craig Casey takes over as scrumhalf.

Ulster lost seven points to Toulouse at home, ending their European campaign in an agonising fashion. Their attention is now on the URC and top four finishes that would guarantee them a quarter-final.

They are currently sitting second, three points ahead of Munster in fourth. There are three regular-season games left.

Dan McFarland's side have not won in the competition since Leinster at home on March 12th.