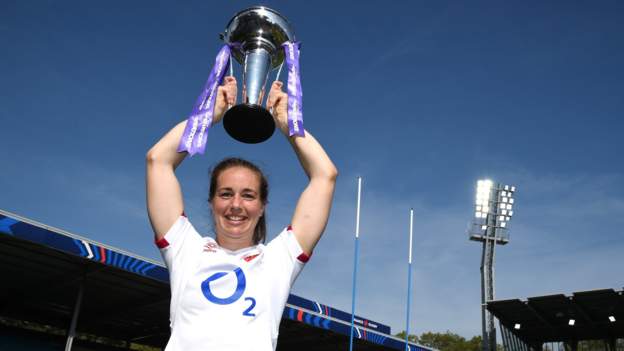 Emily Scarratt, England centre, said that the pursuit of a record-breaking win comes with extra pressure after they won a Grand Slam for their 23rd consecutive win.

England's next fixture in September is expected. Their success there will bring them the longest winning streak for a top-tier team.

Scarratt stated that there is pressure to do so in BBC Radio 5 Live's Rugby Union Weekly.

Scarratt (32 years old) said: “We're pretty good at taking it all in stride. We place a lot of pressure upon ourselves to perform and it's almost non-relevant what the final score is.

Scarratt anticipates that there will be some backlash from France when England play France in the World Cup pool stages in October.

Scarratt thinks they could meet again in the knockout stage. Scarratt also believes that “if they ever have to get up for a match, it's against England at a World Cup”.

“I don’t believe any of us are under any illusions as to when that game will come around how hard it’s going be,” she said.

“I don't believe any of us wanted that game to end.” [the Grand Slam decider]You can also give them the glimmer of hope that they beat us so close to such an important competition.

Although on-field records may not be possible until later in the year due to delays in recording, attendances at this Six Nations broke new ground for England.

Red Roses attracted back to back record crowds at home, thanks to the new tournament window that was separate from the men’s event.

Total of 15,836 people watched Scarratt earn her 100th cap in her hometown of LeicesterShe was “so proud” to have been a part of England's growth in women's soccer.

She said, “We are so grateful for your support.”

There are two ways to repay it. We put the product out there on the field. The other is trying to reach as many people after the games.

“It's harder to get around everybody now that there are more people – it used been a lot easier!”