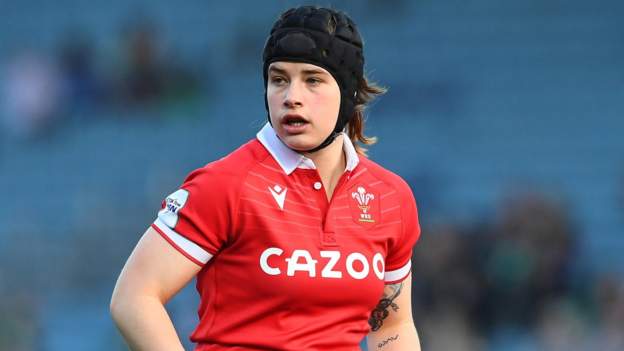 Five changes have been made by Wales and two positions switched for Friday night's Six Nations game against France.

After England's 58-5 loss, Elinor Wintersill and Keira Begvan were reinstated as the halfbacks. Kerin lake is replaced at the centre by Robyn Williams.

Sioned Harries drops to the bench as Captain Siwan Lillicrap is back at number 8.

Sisilia Tuipulotu is a teenager second row who played against England. Fly-half Niamh Lynch is called up to the 23.

Kerin lake and Donna Rose are among the replacements.

France's unbeaten record after three rounds is being boosted by Caroline Boujard, a winger who was a star of last year’s championship and scored a 15-minute hat trick against Wales.

The French made seven changes to their side that beat Scotland. Chloe Jacquet joined Boujard's back line, while Marine Menager joined Boujard.

Gabrielle Vernier is in the middle, Clara Joyeux and Agathe Sochat are back at the front row.

Romane Menager begins at number 8 in the other change.

Wales will look to bounce back from heavy defeat by title holders England but face another tough challenge against a French team currently ranked third.

France scored 50 points or higher in their three previous meetings with Wales. Ioan Cunningham's side, however, turned professional at year's start and has enjoyed victories against Ireland and Scotland.

Cunningham, the Wales coach said that they learned a lot from the England Test. We have had two weeks of preparation for this game and are excited to get on with it.

“France are among the top three teams worldwide, with powerful runners and attacking options throughout the pitch. This will be a test for us.

“We must be prepared to take all our attacking opportunities, and our selection behind scrum reflects this.

“We've looked at different combinations that could give us more attacking options and allow us to get the ball to our backs.”