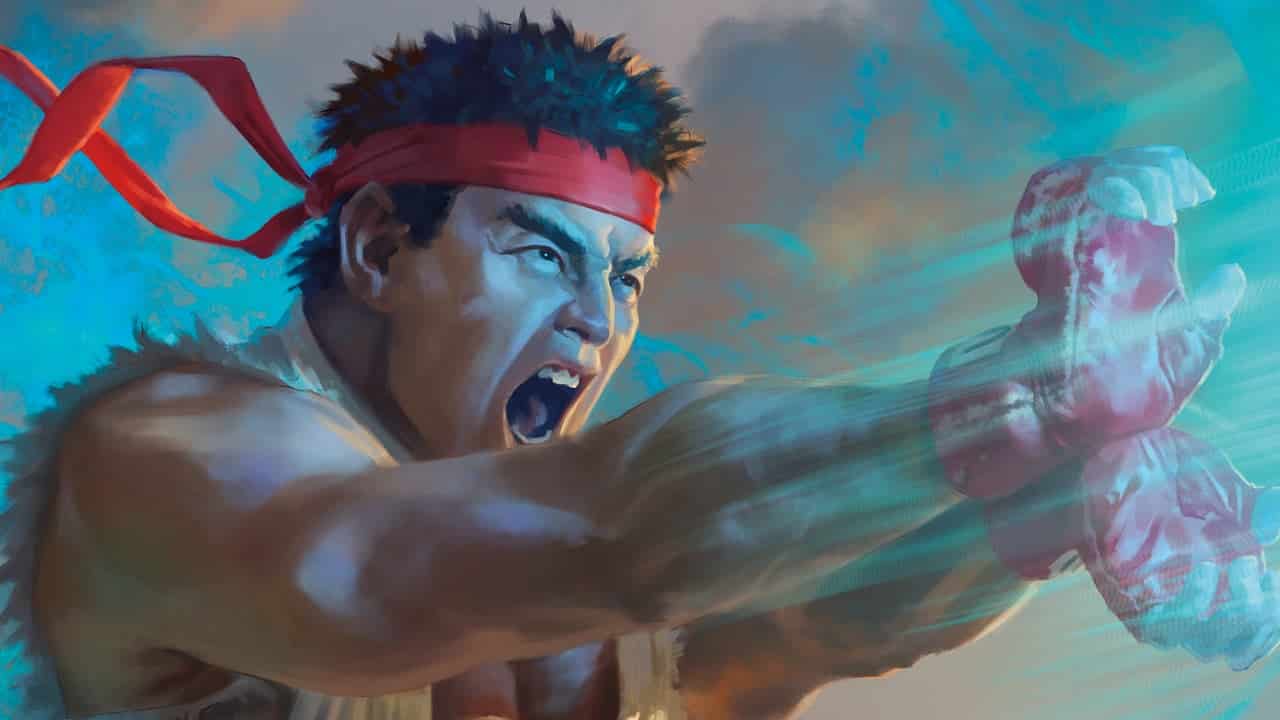 The Street Fighter Secret Lair will include eight legendary creature cards (as well as one more secret card that will be revealed during the Capcom Cup Pro Tour this weekend), each of which depicts one of the fighters from Street Fighter 2’s original roster.

WOTC’s Mark Heggen tells me they began conversations with Capcom for this crossover about two years ago, and that they tried a bunch of different character lineups and creative angles, but that it ultimately made the most sense to focus on the these eight classic fighters. The team even considered making cards based on specific moves or iconic things that weren’t characters themselves (for example, something like a “Round One” or “Perfect” card), but that they instead decided to represent moves as abilities on each creature.

These abilities are very versatile and can be used to do anything mechanically. They include everything from Multikicker for Chun-Li to Skulk for Dhalsim to Untap symbol on Ryu. That last one is a particularly odd choice given it’s only shown up on a One card after its initial introduction in 2008's Shadowmoor block, but Heggen says it was explicitly used as a visual joke here: the symbol looks like the quarter-circle joystick motion required to do Ryu’s Hadoken ability in the video games.

“We don't want to accidentally ruin your life.” [Legacy and Vintage] by casually printing hyper-powerful cards into them.”

“What happened is the team, for all of these, they sat down at the very beginning and just started going through everything Magic's done and saying ‘is there a fit?’” Heggen explains. “When we're doing the Secret Lair executions of this, it really does unlock the team to go wherever they want to go with it. We wouldn't put all of these abilities into a set. Instead, we would think about adding Multikicker or Untap to the set. You can't just weave these into any of our products, but when you're doing these one-off cards and you're trying to build a Chun-Li that's gonna go on to live a wonderful life in Commander decks where people are pulling through all of Magic, it just unlocks all of that.”

Heggen says that Commander is “the primary lens through which [we’re] viewing these,” but that there’s no “arbitrary threshold” they have to hit in terms of viability or popularity in the format. Commander is unique in that it’s one of the few formats where building the strongest deck you possibly can isn’t necessarily the goal, so Heggen says that “if we make a card that leads to a certain kind of deck with a certain kind of attitude, it will find an audience and that audience will play that deck and enjoy that deck and have fun with that deck, and not simply because it's the right power move.”

Browse the gallery belowSee all the cards from February's Superdrop.

These cards can be played in Legacy and Vintage Eternal formats as well. WOTC also considers this from a balancing perspective. Heggen reassures me that they are “thoughtful” about what new Secret Lair cards are doing to strategies outside of Commander, saying “we're not trying to accidentally ruin those formats by casually printing hyper-powerful cards into them.”

The idea of Secret Lair cards with mechanically unique Secret Lair cards has been a topic of conversation in the community, regardless if you are a player or not. I spoke with many players last year, and they all agreed that it was possible to create unique Secret Lair cards. There are many mixed opinions on the matter, but since then some of the displeasure with the idea has softened after WOTC revealed that in-universe reprints of these licensed crossover cards would be available in certain booster packs at a higher rate than many people had assumed they might be – a move Heggen says has “always been the goal” since they decided to make them.

“Now that we have these in-world alternatives for these cards, they are available and people should be able to purchase them.”

“Before we showed them the numbers, so to speak, with Stranger Things, we weren't surprised that people were a little bit skeptical,” Heggen admits. “Now that we're making these in-world equivalents for these cards, we want those to be around and we want people to be able to get their hands on them. They are not meant to be the ‘chase objects’ – 10 years from now, we want these Street Fighter ones to be the cool ones that have a little bit more caché and are a bit more interesting to see. We want their in-world equivalents to be the ones that are there for people who are just looking for the gameplay.”

The February Superdrop features the Street Fighter Secret Lair, seven other drops, and a variety of themes, including Kamigawa: Neon Dynasty. The cards from these drops have been revealed by us, as you can see in our gallery. These are their official names and descriptions.

These are standard Secret Lairs that feature reprints of old art. Some of these cards are highly sought-after and would be worth more than the drop's price if they were bought together. For example, Bribery in the “Introducing: Kaito Shizuki” drop has a market value of about $30, the same price as the drop itself. This isn't a first for a Secret Lair or anything, but I asked Heggen if that sort of thing is something they actively think about when choosing the cards for each new drop – and while he didn't address the prices of cards specifically, he did say picking the right ones is more of an art than a science.

“Every Secret Lair starts with its concept,” Heggen explains, “and from there we then look to the cards. We want cards that make sense.” While that’s the starting point, he also says they “don’t want to spend a lot of time and energy putting gorgeous, amazing art on cards that we don’t think anyone would ever want to do anything with,” meaning playability is also a factor to some degree. “These are not just small paintings, right? These are game objects.”

Heggen tells me that Secret Lairs are something they plan to continue exploring in the future. The latest example is a recurring set of basic land drops based upon astrological signs. “We're just trying different things to see what works for people, what connects with people, and what is the best experience for people following along at home,” pointing to the fact that the astrological lands will be on a cycle separate from the regular Superdrops and will be available to order any time during the year.

This experimentation extends to licensed crossovers, too, with collaborations with Fortnite, Warhammer 40,000, and Lord of the Rings all announced. “We're still in that phase with these where these go back to our very first brainstorms,” Heggen tells me, saying they are still working through the top of the list of ideas they initially came up with years ago – while continuing to add to that list too. “We just can't stop thinking of cards we wanna print and artists we wanna work with and hilarious gags that make us smile. We have a ton of fun stuff in the pipeline and and we'll try different things until we get it right.”

The Street Fighter Secret Lair will also be available from February 18th through March 18th on the Secret Lair Website. The final secret card will be revealed during the Capcom Pro Tour 2021 Season Final on February 19.