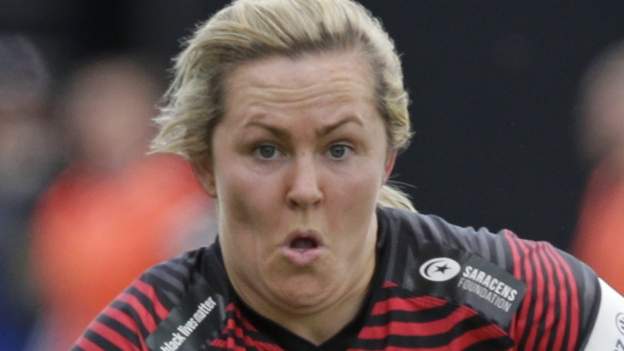 Jennine Detiveaux is flanked by Patricia Garcia, the Spanish fly-half who was unable to score the crucial late try against Bristol in the semi-final.

Holly Aitchison continues to replace Zoe Harrison, who was injured at Sarries 10.

Georgia Evans, second rower for Wales International is included in the Saracens. She could play her first match since then. suffering a serious arm injury against Bristol in February,

Packer and Lotte Clapp co-captains the side. “We have a winning mentality. We always want to do the best we can,” claimed Lotte Clapp, wing.

“Once you have a taste for it like we did with the first trophy, you will want more. Once you feel that way, it's something you won't want to lose.”

Although Saracens lost a record 54-12 to Chiefs in their last meeting in May, they had, unlike the Chiefs, already secured their place in the play-offs.

Susie Appleby, Exeter head coach, believes that the win will put an end to any aura surrounding Saracens.

“That gave me some confidence. She said that we have since played some very tough games against Bristol, and are now ready for the top of the league side.”

“We're strong enough to win it. Saracens are a great team, and finals can throw up any number of challenges. But we've discussed being Chiefs and being ourselves as Chiefs. It gives you confidence, but not too much.